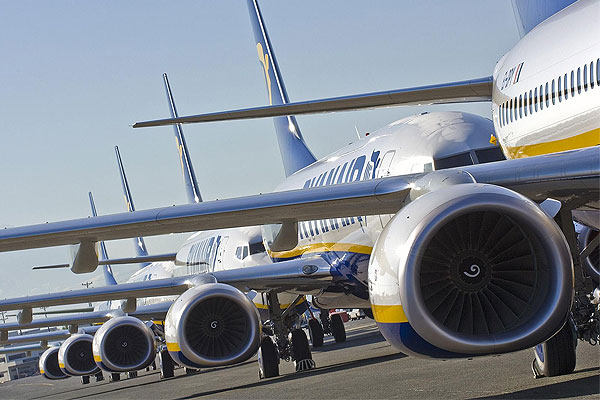 Ryanair pointed to its experience during previous strikes which included five days of strikes by less than 25% of its Irish pilots this summer, and on each of those days, Ryanair completed 280 of its 300 flights to/from Ireland, because over 75% of its Irish pilots continued to work normally.

Ryanair rejected false claims made by Belgian union CNE that strike action by its small minority of cabin crew on the 28th September would cause “travel chaos”.

Ryanair pointed to its experience during previous strikes which included five days of strikes by less than 25% of its Irish pilots this summer, and on each of those days, Ryanair completed 280 of its 300 flights to/from Ireland, because over 75% of its Irish pilots continued to work normally. In total yesterday Ryanair operated over 2,200 flights and carried over 380,000 customers with no “chaos”.

In Germany, despite a strike by pilots and cabin crew, over 70% of Ryanair’s German based pilots and cabin crew reported for work and Ryanair completed over 250 of its daily schedule of 400 flights, because 150 flights had been pre-cancelled on Tuesday 11th with the small group of affected passengers being re-accommodated and/or refunded.

Ryanair’s Kenny Jacobs said: “Repeated false claims made by these unions about “travel chaos” have proven to be unfounded. While we regret the limited strike actions that have taken place this summer, in all cases we have judiciously pre-cancelled a small number of our 2,500 daily flights in order to minimise customer disruption and inconvenience.

We object to these lurid and inaccurate press headlines which wrongly to refer to “travel chaos”, despite the fact that during the seven days of partial strikes by a small minority of our pilots and cabin crew this summer, there has been very little disruption and absolutely no “chaos”.

If there is a further unsuccessful cabin crew strike on the 28th Sept next then, as we demonstrated in Germany yesterday, Ryanair will pre-advise customers of a small number of flight cancellations, and the overwhelming majority of Ryanair’s flights and services that day will operate as normal, and we will carry the overwhelming majority of the 400,000 passengers who will be scheduled to fly with us that day.”