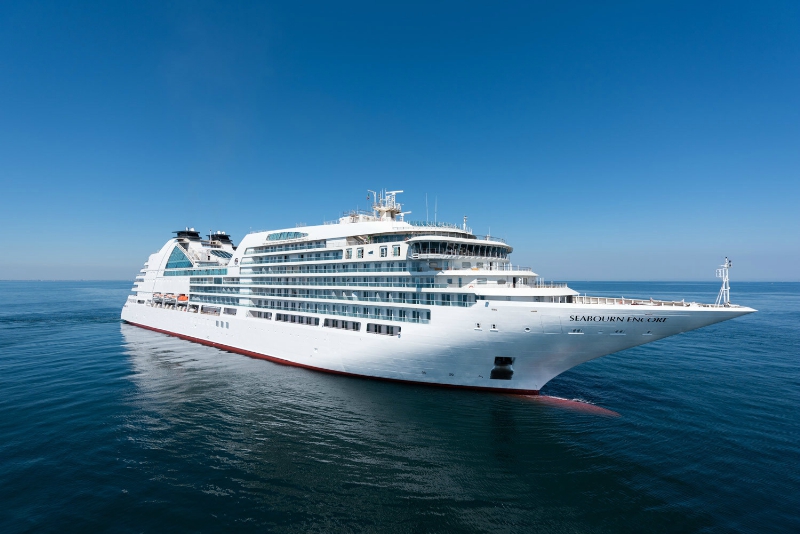 The ship carries 600 guests, based on double occupancy, who reside in 300 elegantly appointed suites each with a private verandah.

SEATTLE – Seabourn took delivery of its newest all-suite vessel, Seabourn Encore, during an official handover ceremony at the Fincantieri shipyard in Marghera, Italy.

"We have been looking forward to this day for over two years. Seabourn Encore has become a stunning ship that will set a new standard in ultra-luxury cruising," said Richard Meadows, president of Seabourn. "I am very proud of our partnership with Fincantieri, and it has been a great pleasure to work together to transform raw materials into this incredible vessel that will make a great addition to the Seabourn fleet."

"The jewel we deliver today is the first built for Seabourn, and dry dock works for the second vessel of this new and prestigious client will start in the next few days in our shipyard in Sestri Ponente. I say this with a certain pride and a lot of satisfaction, because Seabourn represents the top range offer of the Carnival Group and Fincantieri is now identified as an absolute reference point from the market, able to offer tailor-made products to an ever wider range of customers," said Giuseppe Bono, CEO of Fincantieri. "This gratifying result became possible thanks to the strategy stubbornly followed in the last years that has allowed us to be in the best conditions to seize the opportunities offered by the market."

Guests of Seabourn Encore will be treated to the line's extraordinary levels of personalized service, with a high staff to guest ratio. The ship carries 600 guests, based on double occupancy, who reside in 300 elegantly appointed suites each with a private verandah.

Designed by hospitality design icon Adam D. Tihany who intended Seabourn Encore "to feel more like a luxury yacht," the 40,350-GRT vessel features modern design elements and innovations in keeping with Seabourn's reputation for understated elegance, as well as one additional deck and new expanded public areas. The ship expands and builds on the line's award-winning and highly acclaimed Odyssey-class ships, which revolutionized ultra-luxury cruising with enhanced accommodations and innovative amenities when they were introduced between 2009 and 2011. New features include The Retreat, a sanctuary designed for guests to relax in private cabanas, with a Spa Treatment Cabana for personalized spa services.

In addition, guests will enjoy superb cuisine, including The Grill by Thomas Keller, the new signature restaurant from three-star Michelin chef Thomas Keller that was introduced on Seabourn Quest earlier this year and will be expanded to the entire Seabourn fleet. A new restaurant for Seabourn, Sushi, makes its debut as a destination for foodies, with a unique look and feel and high-quality dishes served throughout the day.

A new production show, 'An Evening with Tim Rice,' created exclusively for Seabourn in association with Belinda King Creative Productions, will open onboard Seabourn Encore in January 2017, when she sails from Singapore on her inaugural voyage. The new Spa and Wellness with Dr. Andrew Weil mindful living program also debuts on Seabourn Encore in January. Both Tim Rice and Dr. Weil will sail on the inaugural voyage.

Encore will be officially christened at a ceremony in Singapore on January 7, 2017. International recording artist and world's best-selling Soprano, Sarah Brightman, will be godmother of Seabourn Encore and officially name the ship during the celebration. The vessel will then depart on its Inaugural Voyage, the 10-day Gems of the Java Sea cruise, bound for Indonesia.

Bringing innovation and style to the sea

Seabourn widely recognized as best of the best, receiving more than 35 top travel awards in 2018