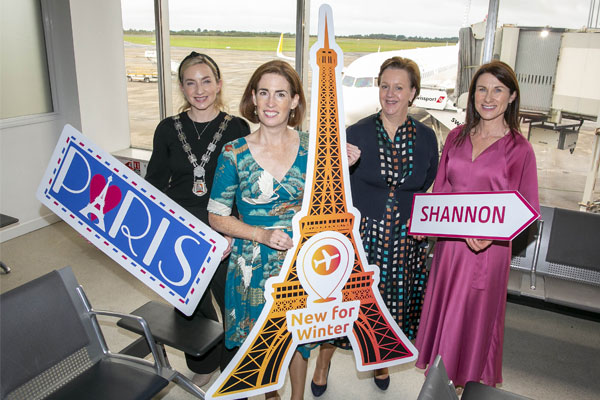 There was an air of excitement at the departures gate for passengers bound for Orly Airport, as the first flight to Paris took off for the city of lights.

Shannon’s new carrier Vueling is part of the IAG group that owns Aer Lingus. Orly Airport is the nearest airport to the centre of Paris, just 13km from the city. It is the second largest airport in France and provides onward connections to major European cities and Middle Eastern countries.

Minister of State for Transport, Hildegarde Naughton TD said: “I am delighted to be here today at Shannon Airport for Vueling's inaugural flight from Shannon. A connection to Paris Orly not only provides significant opportunities for the people within this region, but also for inbound traffic from Paris – further boosting tourism connections between the Mid-West of Ireland and Paris.”

Welcoming the flight, CEO of The Shannon Airport Group, Mary Considine said: “This is an exciting day for our passengers heading to the beautiful city of Paris and a great day for our team who work hard to grow connectivity options for our passengers from Shannon. We would like to warmly welcome our new scheduled partner Vueling, to Shannon, and look forward to working with them. Paris is a wonderful city break destination for outbound holiday makers and opens the way for French tourists to explore the Wild Atlantic Way via Shannon Airport.”

The first passengers to jet off from Shannon to Paris were treated to a taste of France at the blue, white and red dressed gate area before they boarded. Freshly made crêpes by a French chef were served in celebration of the new service, along with a Parisian themed cake.

Charlotte Dumesnil, Sales Director of Vueling says: "We are delighted to expand our Irish operations with our first route from Shannon to Paris Orly, building on our existing Irish connections whilst also offering inbound passengers ease of access to the West Coast of Ireland. This new direct route reinforces Vueling’s interest in providing a more flexible and varied proposition for travellers based in Ireland.”

Dr Loïc Guyon, Honorary Consul of France for the Midwest region, congratulating The Shannon Airport Group on the new service said: “The new Shannon / Paris Orly connection, the second connection to Ireland’s closest EU neighbour, will be a huge boost to French tourism to the West of Ireland and to Irish tourism to France, but also for businesses located in the airport’s catchment area. This is the result of the determination, resilience, and dedication of the management of The Shannon Airport Group.”

Paris is just a two-hour flight from Shannon Airport. The city is known far and wide as the European epicentre of culture, cuisine, fashion, and style. From the Eiffel Tower and the Arc de Triomphe, to Disneyland Paris and river trips along the Seine, visitors will be spoilt for choice.

Shannon Airport expects to welcome 75,000 passengers through its doors from now, through to New Year’s