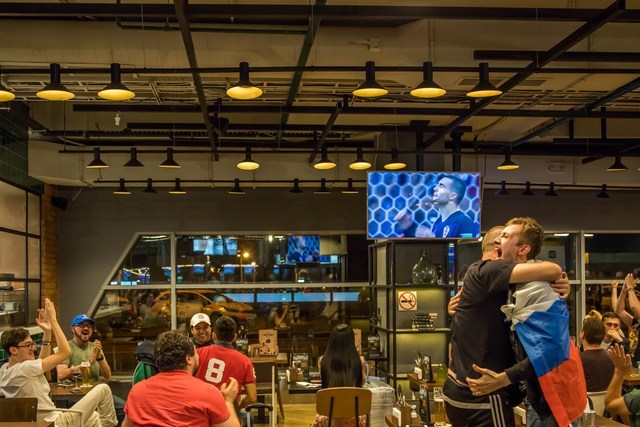 The new Terminal B and the tunnel connecting Sheremtyevo-1 and Sheremetyevo-2 were constructed for the 2018 FIFA World Cup and are part of the Long-Term Development Plan.

MOSCOW – Sheremetyevo International Airport bids farewell to the players and fans of the 2018 FIFA World Cup. For the past month, Sheremetyevo International Airport witnessed about 33 800 takeoff and landing operations (+16% as compared with the same period of 2017) and 4.7 million passengers (+11% as compared with the same period of 2017). The growth was due to the growing demand for air travel during summer holiday season as well as football fans from all over the world, who visited Moscow and took part in the most anticipated sporting event of the year.

Thanks to new infrastructure, increased staff and more efficient entry measures, Sheremetyevo International Airport was able to comfortably welcome passengers from around the world to Moscow for the World Cup.

The new Terminal B and the tunnel connecting Sheremtyevo-1 and Sheremetyevo-2 were constructed for the 2018 FIFA World Cup and are part of the Long-Term Development Plan. This plan ensures that Sheremetyevo will increase its capacity to 80 million passengers per year by 2026, making it one of the top 10 largest passenger hubs in the world. The success of the World Cup demonstrates that the Long-Term Development Plan is on pace to meet that target.

"It was a pleasure to host players and fans from around the world as they gathered in Russia for the World Cup," said the Chairman of the Board of Directors of JSC SIA Alexander Ponomarenko. "We worked hard to ensure guests at Sheremetyevo received the finest service and a warm welcome to Moscow."

Earlier this month, Sheremetyevo International Airport placed second in terms of direct connectivity growth in ACI Europe's Airport Industry Connectivity Report 2018. In the past five years, the airport has witnessed a 74% increase in the number of passengers who have switched their flight at Sheremetyevo.

"I congratulate the French National Team on their victory in the World Cup, and I wish them comfortable travel from Moscow Sheremetyevo Airport back home," said Mr. Ponomarenko.

Sheremetyevo International Airport is the largest Russian airport in terms of passenger and freight traffic, takeoff and landing operations, the area of the airport facilities and the capacity of the cargo facilities. The Sheremetyevo route network comprises more than 200 destinations. In 2017, Sheremetyevo set a historic record for passenger traffic, serving 40 million 93 thousand people what is 17.8% more than in 2016.

Sheremetyevo International Airport was Europe's best airport for service quality in 2012, 2013 and 2015 in the ACI (Airports Council International) ASQ (Airport Service Quality) rating. In 2016 and 2017 Sheremetyevo was ranked first in Europe for the quality of passenger service in the category of airports with a passenger flow of 25-40 million people per year.