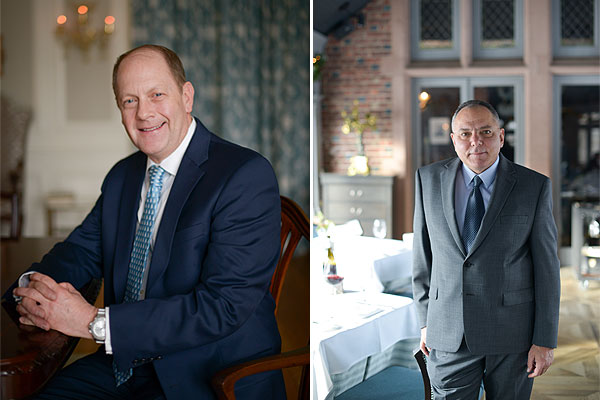 As General Manager, Stephen Benson will oversee the entire operation of the 24-room property. In his role as Food and Beverage Manager / Sommelier, Alan Champney will oversee the property’s robust culinary operation, including The Conservatory, bar and lounge, Dom Perignon champagne salon, seasonal outdoor dining venues, in-room dining, and catering/events.

LENOX, MA – Blantyre Country Resort in the Berkshires ushers in the new year with the appointment of two new executive staff members. Stephen Benson has been named General Manager, and Alan Champney named Food and Beverage Director/Sommelier, of the legendary Relais and Chateaux property in the Berkshires.

As General Manager, Stephen will oversee the entire operation of the 24-room property located on 110 acres in western Massachusetts, bringing nearly 30 years of experience in the luxury hospitality industry to his new role. Prior to joining Blantyre, he was the Regional Hotel Director for American Cruise Lines, a privately owned cruise line with 10 ships and 35 itineraries throughout the country. Previously, he was the Resort Manager at Four Seasons, Scottsdale, Arizona, and held General Manager positions at the Royal Palms Resort & Spa in Phoeniz, Arizona; and Four Seasons Jackson Hole, Wyoming. Stephen started working in the hospitality industry as an employee of Starwood Hotels and Resorts, where he spent 14 years in various management positions in finance and operations at the St. Regis Aspen, The Crescent, and The Phoenician. He earned a Bachelor of Science degree from the University of New Hampshire, and began his professional career as an external auditor for Arthur Anderson & Co.

In his role as Food and Beverage Manager / Sommelier, Alan Champney will oversee the property’s robust culinary operation, including The Conservatory, bar and lounge, Dom Perignon champagne salon, seasonal outdoor dining venues, in-room dining, and catering/events. Before joining Blantyre, he was a fine wine consultant for Masciarelli Wine Company, representing their portfolio across an existing customer base and expanding their clientele. Prior to this, Alan owned and managed L’Alouette Bistro in Harwich Port, Massachusetts, for over ten years. He also held
restaurant management and sommelier roles at a variety of dining establishments throughout Massachusetts, including Fin Restaurant, Nauset Beach Club, and Abbicci.

Heralded as one of world’s most legendary destinations, the iconic Blantyre continues to provide a curated ultra-luxury experience for generations of guests. The Relais & Chateaux resort was updated in 2018 with a reimagined aesthetic that honors a rich heritage with a bow to the old and a nod to the new. Blantyre remains an enduring symbol of refined elegance and timeless appeal, redefining bespoke New England travel.