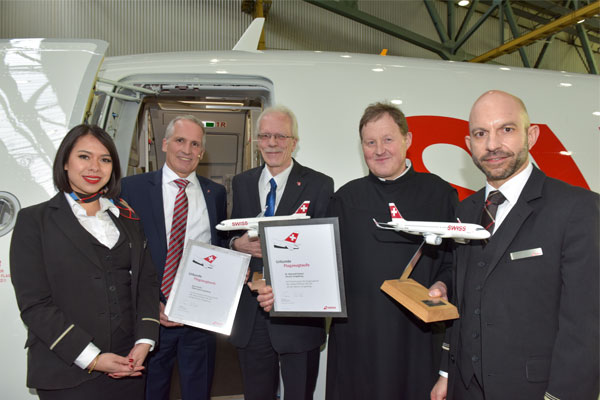 SWISS will be receiving a total of 25 new aircraft of the Airbus A320neo family.

SWISS took delivery of the first of 25 new aircraft of the Airbus A320neo family. The new arrival was formally welcomed to the fleet and named “Engelberg” in a ceremony at Zurich Airport. In acquiring these advanced and efficient short- and medium-haul aircraft, SWISS is further underlining its commitment to resource-friendly aviation. With its innovative engine technologies, the Airbus A320neo consumes some 20 per cent less fuel than comparable aircraft of the older generation. SWISS’s new Airbus A320neo also features a newly developed seat that tangibly enhances its passengers’ travel comfort.

The first Airbus A320neo of Swiss International Air Lines (SWISS) landed in Zurich. The aircraft, which bears the registration HB-JDA, arrived directly from Airbus’s Hamburg-Finkenwerder works airport in northern Germany. SWISS will be receiving a total of 25 new aircraft of the Airbus A320neo family (the “neo” stands for “New Engine Option”) between now and the end of 2024: seventeen A320neos and eight of the larger A321neo version. The new twinjets will replace older Airbus A320 family aircraft in the SWISS fleet’s ranks and, with their innovative powerplant technology, will help substantially further enhance SWISS’s environmental efficiency.

After arriving in Zurich, the latest member of the SWISS aircraft fleet was formally welcomed in the hangar area by a delegation of invitees from the political, business and media worlds, and was also named “Engelberg”. The naming was jointly performed by Alex Hochli, the mayor of the Central Swiss mountain resort, and Brother Meinrad Haberl of Engelberg Monastery.

Lower fuel consumption and lower noise emissions
Thanks to the advanced technology of its Pratt & Whitney engines and its aerodynamic “sharklet” wingtip extensions, the Airbus A320neo consumes up to 20 per cent less fuel than comparable aircraft types. The new twinjets are also equipped as standard with noise-reducing vortex generators. As a result, a departing Airbus A320neo has a noise footprint on takeoff which is around half the size of the footprint produced by a comparable aircraft type.

“Our new Airbus A320neo family aircraft will substantially further reduce the average age of the SWISS aircraft fleet,” says SWISS CEO Thomas Kluhr. “Once they are all delivered, our aircraft’s average age will be one of the youngest in Europe at around nine years. These billion-franc investments will further enhance our environmental credentials, too,” Kluhr continues, “because operating an advanced and fuel-efficient aircraft fleet is one of the most effective means of all of reducing the ecological impact of aviation activities."

An innovative seat for greater travel comfort
The new SWISS Airbus A320neo also offers substantially more travel comfort to both Business and Economy Class passengers, thanks to its newly-developed seats from Italian manufacturer Geven. With their ergonomic pressure distribution over the backrest and the seat cushion, the new seats deliver a tangibly pleasanter sitting experience. And the innovative horizontal placement of the literature pocket above the seat table also provides more personal space.

It’s not just aloft, either, that passengers will enjoy an even more comfortable flight: the new seats can be reclined to 20 degrees (instead of the previous 12) during the taxi, takeoff and landing phases. And Business Class travellers can even recline their seat to a full 26 degrees during the cruise phase of flight.

SWISS will be deploying its Airbus A320neos on its short- and medium-haul routes of up to 4,200 kilometres within Europe and to and from destinations in North Africa and the Middle East. The Airbus A320neo accommodates 180 passengers in Business and Economy Class.

SWISS to recruit new pilots from 2023