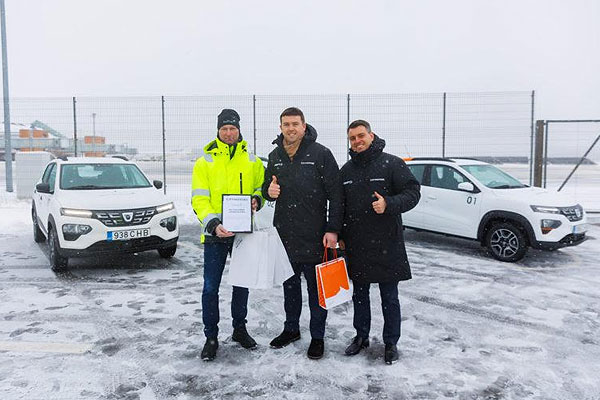 Three electric cars, which are meant for the employees who perform the tasks required for aircraft servicing, arrived at Tallinn Airport on 3 January. The introduction of electric cars is an important step in reducing the carbon footprint of both the company and the group as a whole.

According to Indrek Nõlvak, Member of the Management Board of Tallinn Airport GH, the introduction of electric cars is important for the company’s environmental goals as well as cost management. “Last year, we started using the first electric scooters to move around in the territory of the airport and they were quickly and warmly welcomed by staff. In order to allow our staff to use green transport to service aircraft during the winter, we decided to purchase the first electric cars. As a result of the tender, City Motors AS, who handed over the cars today, became a good partner for us,” said Nõlvak, adding that aviation is not an environmentally friendly industry by nature, but as a responsible ground handling service provider, they work hard every day to reduce their impact on the environment. “Employees can now start using Dacia Spring all-electric cars, which will replace the vehicles using fossil fuels.”

According to Jüri-Bruno Asari, Member of the Management Board of City Motors AS, the decision of Tallinn Airport GH AS sets a great example for all companies that want to show responsibility and reduce their daily carbon footprint. “In today’s world, movement is an essential part of our daily lives. Whether you’re travelling by plane to a distant foreign country, or driving from point A to point B when taking care of your daily business. The decision of Tallinn Airport to start using Dacia Spring electric cars for aircraft servicing makes it possible to do it in an environmentally friendly and much more cost-effective way than with vehicles with internal combustion engines. When we participated in the procurement, we took into account in detail all the aspects that would allow the vehicles to perform the tasks set for them in the best possible manner. We thank you for your trust and believe that this step will give the electrification of Tallinn Airport’s fleet an even bigger boost.”