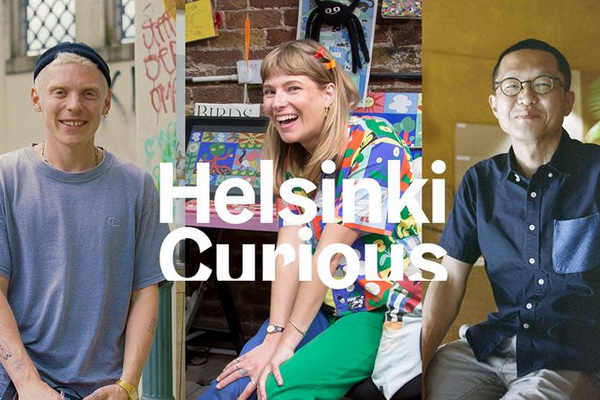 Finland has been named the happiest country in the world for the 5th consecutive year. Its capital city, Helsinki, is gaining increased recognition for its quality of life, vibrant lifestyle, and proximity to nature.

The City of Helsinki wanted to deconstruct what makes the city intriguing for visitors in an innovative way: it tasked three “Helsinki Curious” artists with capturing the essence of the city in an original piece of artwork. The exceptional artistic process saw Aysha Tengiz (London), Jack Sachs (Berlin), and Takashi Nakamura (Tokyo) create an illustration based solely on the shared stories by previous visitors and by conducting interviews with people who have experienced Helsinki themselves. The artists were prohibited from gathering any online or social media research on Helsinki during the project.

Finland has been named the happiest country in the world for the 5th consecutive year. Its capital city, Helsinki, is gaining increased recognition for its quality of life, vibrant lifestyle, and proximity to nature. In just a few years, Helsinki has consistently featured in Monocle’s top 5 most livable cities and the Work-Life Balance Index as one of the best cities for work-life balance.

The City of Helsinki wanted to find out whether the recent increase in visibility in global media has had an effect in interest towards the Finnish capital. Based on a survey* conducted among people in London, Berlin, and Tokyo, very few have ever been to Helsinki, but an overwhelming number (i.e., 92% in Berlin) of participants are curious to visit.

Aysha Tengiz, the Helsinki Curious artist from London: “As I wasn’t allowed to google Helsinki, I had to approach my artistic process in an entirely new way. Luckily, the stories I got a chance to read from Helsinki’s visitors were incredibly detailed and descriptive. Based on them, I slowly but surely built up an idea of what it’s like.”

Jack Sachs, the Helsinki Curious artist from Berlin: “Before I started, I really didn’t have much of an image about Helsinki. Reindeer came to mind, that was about it. From the interviews I learned that Helsinki has a particularly diverse, unique, and open-minded nightlife. That’s what the character in my artwork represents.”

Takashi Nakamura, the Helsinki Curious artist from Tokyo: “When I first heard about the task, I thought it was a joke as the idea seemed a bit outlandish. But luckily it wasn’t! After hearing stories of Helsinki, I wanted to capture its closeness to nature.”

The final artworks portray Helsinki from various perspectives. A sprawling archipelago just outside of the city center, people walking on ice and singing their hearts out in a karaoke taxi, and a dancer enjoying an open-air party were among the scenes the artists illustrated in their work.

“We were overwhelmed by what the Helsinki-love visitors showed in the stories they sent to our Helsinki Curious artists. The artists proved that curiosity truly leads the way as all three imaginary Helsinki artworks magically succeeded in capturing the essence of the city,” says Anu Syrma, Brand, Marketing and Communications Director at Helsinki Partners.

Rather than one-off branding campaigns, the city of Helsinki is known for its holistic and value-based approach when marketing itself to travelers, businesses, and talent alike. For example, the Helsinki Freedom (2020) Instagram documentary project by award-winning Helsinki-based directors attracted new talent to the Finnish capital by highlighting the different freedoms one can experience while living in the city.

The Helsinki Curious artworks are revealed on September 6th

An exhibition revealing the compleet artworks and documentaries following the artists’ processes opens in Helsinki on September 6th, 2022, during Helsinki Design Week – an event that brings together patrons and viewers interested in contemporary design and art. The Helsinki Curious artworks will also be on display on billboards in campaign cities in Fall 2022 – bringing the artists’ work to life in London, Berlin, Tokyo, and Helsinki.