The Golden City Gate starts to the 20th year 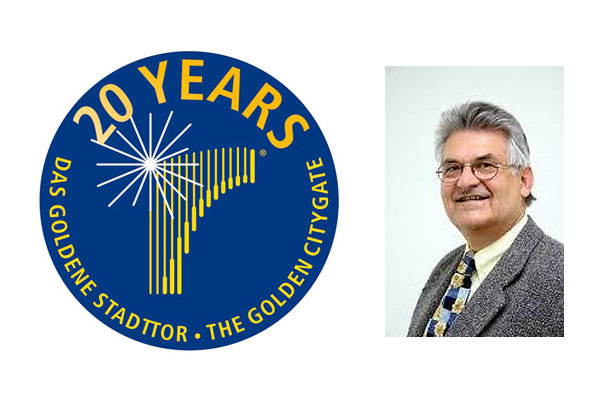 Wolfgang Jo Huschert, President and founder of the competition.

Tourism films and candidates from 53 different countries have participated in the last 20 years.

The “Golden City Gate” celebrates its 20th anniversary this year in the framework of the ITB. The tenders for the 2020 media competition have started these days. The competition is one of the oldest competitions in international tourism.

The corporate design of the international Tourism – Film-Print-Multimedia-Competition “The Golden City Gate” will be rejuvenated on its 20th anniversary.

The slight change is not only intended to modernize the competition, but also to intensify its online presence.

Dusseldorf communication designer Prof. Helfried Hagenberg and his team have slightly changed the previous logo. The new 20 Years logo is round, can be easily edited digitally and is very memorable. Clear lines symbolize the yellow half city gate and now mark the new logo. Furthermore, the logo remains two languages. This is very important for the global activity (call for tenders). The colors – blue and yellow have become more flat and have been supplemented as a special eye-catcher with a white star. The writings in German and English are easy to read.

Gradually, the new logo will be incorporated into further publications.

Wolfgang Jo Huschert, President and founder of the competition: “In the future, we want to use the competition even more prominently on the internet and expand our internationality."

Tourism films and candidates from 53 different countries have participated in the last 20 years
A special feature of the media competition are the two jury sessions. Once the big jury to select the winners and from the winners in all categories, the VIP jury in Berlin is looking for the “main winner” who will receive the Diamond Award.
In both jury sessions, the jurors are tourism executives, media experts, radio and television personalities, and representatives of many embassies.

From now on, interested parties can inform themselves on the website das-goldene-stadttor.de and already register for the competition.

The jury meeting will take place shortly before the ITB in March 2020. The ceremonial award ceremony together with a reception for the 20th anniversary will take place within the framework of the ITB.