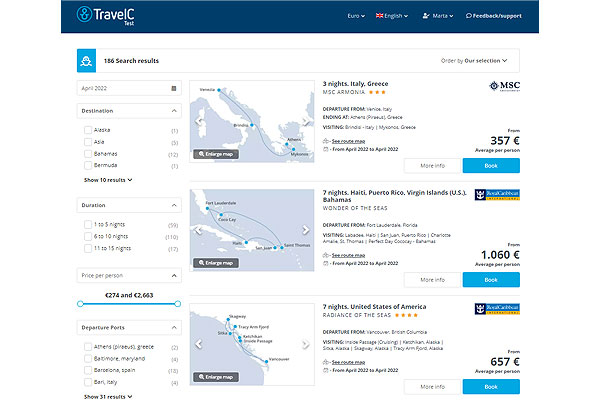 The project has been carried out in collaboration with the IST company, which will allow the inclusion of the largest possible number of shipping companies in a short time.

Travel Compositor launches the first version of its brand new cruise engine, on which it has been working for more than a year and in a joint venture with IST, which is one of the three companies in the world that have had access to join in the last few years to carry out the connection of multiple shipping companies, something that today is very difficult to achieve, since they are not giving more integration permits to other technology companies, seeking to favor their more direct sale.

In its version 1 of the new engine, it already has the integration of the four main shipping companies in the market: Royal Caribbean, MSC, Costa Cruises and Celebrity Cruises with which more than 2,000 itineraries and 65 available ships are already offered.

Like all its technologies, this is a first version that will be improved every month and to which functionalities and more products will be added, including customer suggestions. In its road map, the forecast is to introduce in the next month and a half five shipping companies of the Carnival group: P&O, Princess, Cunard, Holland and Carnival itself in mid-January, NCL, and from there one more per month until reaching about 24 in total. And it will be from the fourth quarter of 2022 when river shipping companies such as Viking will begin to integrate.

As in all Travel C engines, there will be multiple cross-selling options, in the next version flights could be added in the summary screen. And in version 3 at the beginning of 2022, the reservation can be complemented with stays, transfers and activities before and after the cruise, as well as a specific version of its MBOX tool, to also be able to add any service before and after the cruise, from the time the reservation was made until the last day of the trip.

Undoubtedly, since version 1 we have already talked about the best Font in the cruise market, very spectacular, with double tabs for each ship and each itinerary, which include a description and photos of the day-to-day itinerary, dynamic maps, image carousels, choice of stateroom via plan of each deck or videos and technical information of each ship, in new full-screen formats, ideal for an agency to show the trip to clients. Authentic dynamic works of art, whose design and style will soon also be brought to your package engine and the land itineraries that are offered in it.

The engine will be available in more than 20 languages and there are already more than 25 current customers in 14 countries, who have confirmed its implementation in their respective Travel C platforms.

With the transparency that characterizes them, Travel Compositor has made available to its current clients or any company that is interested a demo in this link that is constantly evolving and polishing details, since the first activations are not planned for until 2 weeks.