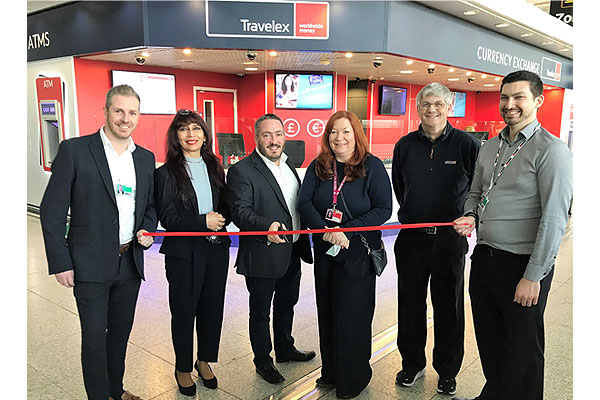 The launch of services at London Stansted – which carried more than 28 million passengers in 2019 – means Travelex now operates at all three Manchester Airports Group (MAG) airports having recently re-won and started services at East Midlands airport in addition to existing facilities at Manchester.

Travelex initially launched 17 ATMs at London Stansted, before recently opening its first two manned stores – all in record time. The bureaux and knowledgeable Travelex staff will provide customers with a full range of traditional foreign exchange services, including access to over 50 currencies.

For added convenience, customers will also be able to withdraw cash from Travelex ATMs and take advantage of Travelex’s click and collect service, by ordering their money in advance and collecting from the airport.

Travelex will, over the coming months, be looking to expand its London Stansted footprint in several ways – including by broadening its range of ATM currencies and increasing its number of bureaux, with the bureaux growth potentially creating dozens of new and local sales and management jobs in the process.

Philip Barter, Commercial Director, Travelex UK and Africa, said: “We are delighted to be able to serve our global customers at London Stansted – an iconic international airport that needs no introduction. With the travel and foreign exchange industries having faced a challenging pandemic period, our launch at London Stansted marks a significant step in the industry’s wider recovery.”

Stephen Turner, MAG Group Retail and Commercial Director, said: “We’re very pleased to welcome Travelex to London Stansted, who now have a strong presence at all three MAG airports. The strength of our partnership with Travelex was a key driver in the record time we were both able to come together and open the new bureaux, providing our passengers with convenient access to a wide range of currency services, both on the day and pre-ordering for collection at the airport.”