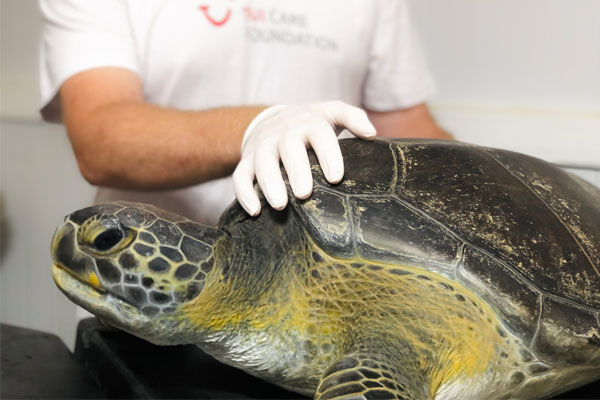 Sea turtles cover extraordinary distances as they journey between their nesting and feeding grounds and migrate to warmer waters for the winter. Together with Turkish NGO Dekamer, the TUI Care Foundation is tracking the journey of two sea turtles across the Mediterranean Sea with a GPS transmitter in order to receive vital information about their feeding sites and migration routes, which helps to safeguard their habitats.

Both turtles were rescued from injury and rehabilitated by TUI Care Foundation’s partner Dekamer in Turkey. Tuba is a Loggerhead sea turtle and was released back into the sea in 2019 and Talay, a Green sea turtle, in 2021.

As part of the TUI Turtle Aid programme the turtles are tracked via GPS satellite transmitter as they journey between their nesting and feeding grounds and migrate to warmer waters for the winter. So far, Tuba has swum an incredible distance of 18,000 km and is now relaxing in the South Adriatic, having visited Greece, Malta, Italy, Bosnia-Herzegovina, Albania, Montenegro and Croatia over the last three years! Talay has swum considerably less – over 500 km over the last 18 months and is spending the winter holiday season in the southern Aegean.

The progress of the turtles as they meander through the Mediterranean Sea on their maritime journey can be seen on the website of TUI Care Foundation here.

The sea turtle tracking is part of TUI Care Foundation’s TUI Turtle Aid programme, which protects endangered and vulnerable sea turtles, especially around nesting beaches. By working with local NGOs and beachfront tourism businesses, it also creates turtle friendly beaches and engages tourists by teaching them about turtles and how to protect them. Since its establishment the TUI Turtle Aid programme has contributed to the protection of over 2 million sea turtles.