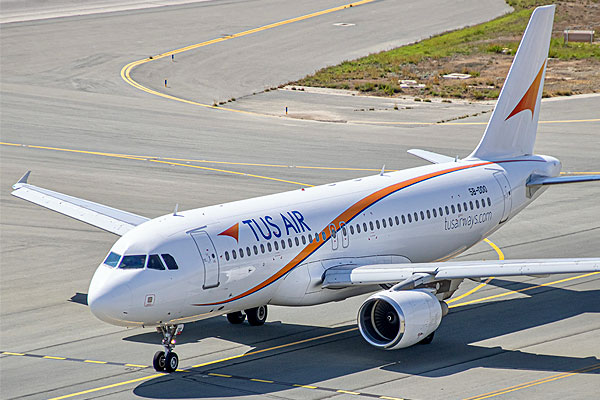 From the 27 th of March 2023, TUS Airways will resume flights from Larnaca to the romantic city of Paris, after a successful summer operation in 2022 with no fewer than 3 weekly flights timed to maximize travel experience and convenience. Also, the airline will further expand the number of flights offered between Larnaca and Tel Aviv with at least 11 weekly flights.

From the 27th of March 2023, TUS Airways will resume flights from Larnaca to the romantic city of Paris, after a successful summer operation in 2022 with no fewer than 3 weekly flights timed to maximize travel experience and convenience. The airline is also strengthening its services on its new winter service between Larnaca & Heraklion, by adding a third flight every Sunday from 26 March 2023. TUS Airways is the only airline offering flights between Larnaca and the island of Crete.

With a vision to be a leading player in the East Mediterranean region, TUS Airways will also expand its operations from Tel Aviv to Greece with new flights to Heraklion as well as extending the recently announced winter destination Athens into next summer. The airline will also resume services to Preveza and continue to operate its popular year-round service between Tel Aviv and Dusseldorf, Germany. The airline will very soon announce the next phase of its summer 2023 plan with exciting new destinations and even more flights on our current route network.

The airline’s Chief Executive Officer, Ahmed Aly said: “After a successful 2022 which saw TUS Airways become the largest Cypriot airline, contributing to the Republic’s tourism, economy, investment and air travel sectors, we are excited to make the first of many announcements about our plans for 2023. Look ahead we are working to ensure next year is another remarkable year as we see stronger demand for flights to destinations across Europe and the East Mediterranean region. From Cyprus, our focus will be to add more flights to our core markets of Israel, Greece and France but we will also shortly announce some exciting new destinations. Proudly flying the Cypriot flag across Europe and the Middle East, we are working closely with the island&#39;s stakeholders, not only to support the development of Cyprus' tourism sector but also to cater to the travel needs of the Cypriot community at home and abroad. We are working tirelessly to ensure another record summer season and to welcome our guests onboard and offer them the very best of Cypriot hospitality.”

The airline recently launched its new and improved fare families, providing its guests with more flexibility & freedom for a seamless travel experience.