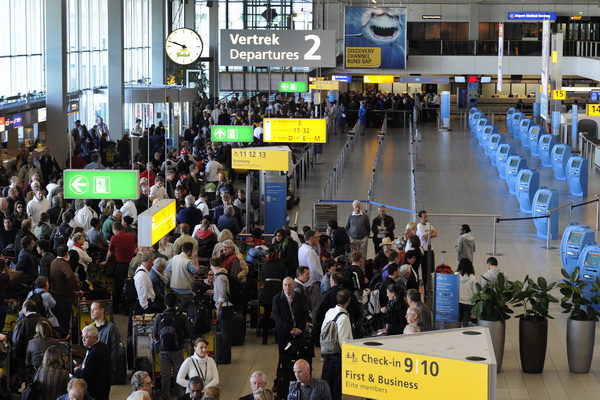 Schiphol and Eindhoven airports have said they will compensate travellers who missed their flights because of the long queues to get through security this summer.

Amsterdam Airport Schiphol will introduce a scheme for passengers who were at the airport on time between 23 April 2022 and 11 August 2022 but missed their flight due to an exceptional waiting time at security control.

Queues of several hours to get through passport control and security have led to hundreds of people missing planes all over Europe, forcing airlines to cancel some services and move some flights to other airports this summer. The airports will compensate travellers for costs which are not being met by their airline or their travel insurance – such as missed nights in a hotel which could not be cancelled. So far the airport has had 1,500 claims and expects many more before the September 30 deadline.

Travellers can apply for compensation for costs incurred to rebook a flight or for a replacement flight, for alternative transport if they have chosen to travel to a destination by other means, or for extra travel costs incurred to travel to Amsterdam Airport Schiphol or another airport. Travellers can also claim accommodation costs at or near Schiphol and the expenses for non-cancellable accommodation, transport or activities at their destination.

“A lot of people have really been looking forward to their holidays abroad, especially after two years of COVID. We’re extremely sorry that some people have missed their flight due to the long security control queue. They’ve had to miss out on all or part of their holiday, and we really sympathise with them. The broadcast of MAX Vakantieman and the appeal made by the Consumers’ Association has underscored this sentiment. During these special times and circumstances, we must not let these people fall through the cracks,” said CEO Dick Benschop of Schiphol.

Aleph Hospitality enters the Democratic Republic of the Congo