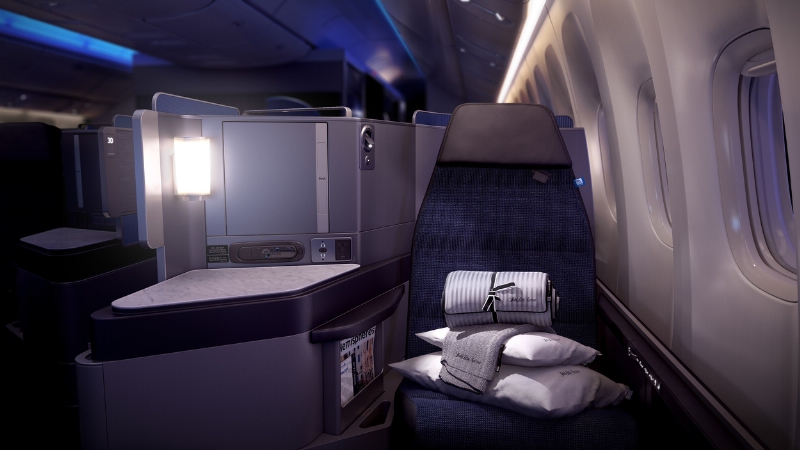 United adds Boeing’s latest generation Boeing 777 aircraft, the 777-300ER, to its fleet for 2017. The 777-300ER’s modern, spacious cabin will be the first to feature the all-new United Polaris direct-aisle seats, part of the airline’s sleep-enhancing business class experience.

With the flight schedule update this weekend, United will offer one round trip six days each week between Newark Liberty International Airport and San Francisco International Airport between Feb. 16 and May 4. The airline expects to begin 777-300ER intercontinental service between San Francisco and Hong Kong on March 25, with the aircraft replacing a Boeing 747-400 currently being used on the route. Flight and aircraft schedules are subject to change.

United's 777-300ER aircraft will offer a modern, spacious interior envisioned in partnership with design firm PriestmanGoode, including the airline's all-new United Polaris business class seat. Each United Polaris suite-like pod will feature direct access to the aisle, a 180-degree flat-bed that measures 6'6'' and 23 inches wide with infinite seat recline options and one-touch lumbar support, ample storage, multiple surfaces that enable passengers to dine while working, universal A/C power as well as 2-USB ports, a 16-inch high-definition entertainment screen, electronic privacy dividers for seats in the center of the cabin, mood lighting and an illuminated "Do Not Disturb" sign. Additionally, a new marble-topped bar unit offers customers in business class a place to grab a mid-flight drink or snack.

This new seat represents the latest in the continued roll-out of United Polaris, the airline's most significant product transformation in more than a decade, featuring a reimagined, sleep-enhancing experience for intercontinental travelers.

The Boeing 777-300ER aircraft will feature 60 seats in business class in a 1-2-1 configuration with direct-aisle access from all seats.

Cabin Experience
Throughout the aircraft, the cabin interior is comprised of bespoke branding elements as well as carpets, fabrics and wall laminates – that, like the United Polaris seat, were specially designed for United, as well as redesigned lavatories which include modern finishings and farmhouse-style sinks. With a focus on providing a more tranquil journey for customers, the new cabin design features LED mood-lighting to complement sleep and assist with time-zone changes as well as textured and softer touch materials which not only provide a more premium feel, but will absorb aircraft noise and other sound within the cabin.