US travellers to Europe have increased by nearly 250%, says Trip.com 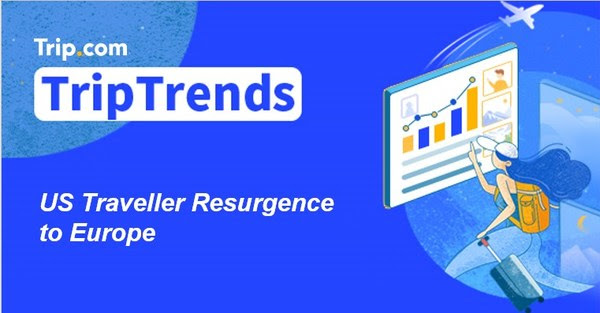 Flight bookings from the USA to key European markets were up 246% in the first half of 2022, compared to the same period in 2021. The most significant leap in transatlantic flights was recorded between July and August 2021, when US bookings for flights to Europe rose by 162%.

US European visitor numbers surge
Data analysis by Trip.com has revealed a huge surge in US travellers flying to Europe, with inbound visitor numbers up by nearly 250% in the first six months of this year.

The significant rise shown by Trip.com's data highlights the healthy rebound in transatlantic travel, which appears to signal a return to near pre-pandemic travel levels.

Flight bookings from the USA to key European markets were up 246% in the first half of 2022, compared to the same period in 2021.

The most significant leap in transatlantic flights was recorded between July and August 2021, when US bookings for flights to Europe rose by 162%.

US dollar strength powers travel return
Over the past year, the US dollar has gained around 14% in value against the euro and British pound, with the dollar recently hitting parity with the euro for the first time in two decades.

The advantageous currency rates have translated to more European trips for US travellers that are 10-15% less expensive for Americans than at the same time last year.

The strong dollar and weaker euro and pound sterling look set to help speed up the recovery so that it exceeds earlier projections that travel will return sooner to pre-pandemic levels.

Top European destinations for US travellers
When looking at the data for preferred European markets, people can see that between January and July 2022, the most popular European market for US departing flights was the United Kingdom.

Spain was the second most popular market for travellers to Europe from the US, followed in turn by France, Italy and Germany.

Trip.com's further data analysis shows that London and Paris were the top European destinations for Americans between January and July this year. Meanwhile, the highly-competitive New York to London route remained the most popular for US travellers, followed by Los Angeles to Paris, then Los Angeles to London.

As evidence of the UK's enduring popularity with US visitors, Trip.com data recorded a huge 678% increase in views for US to UK flights when comparing the first half of 2022 with the same period in 2021.

Return of transatlantic travel
Commenting on the return of US travel across the Atlantic, Rich Sun, Trip.com Group's General Manager for the Americas, said: "Transatlantic travel is well and truly back and London is clearly the most popular destination once again for US travellers.

"Our analysis of Trip.com's latest data shows a significant surge in demand for travel, not only to the UK but also to other leading European capitals, with Paris and Madrid proving almost equally as popular.

"The massive 246% rise in inbound transatlantic bookings from the US to Europe is evidence, if any were needed, that consumer confidence has once again returned to the market.

"We believe the increased value of the strong US dollar versus the weaker Euro and fall in the value of Pound Sterling means that US travellers have so much more buying power in Europe, which has helped to mark the continent's return once more as a major destination for the US market."

Bumps in the road
While the overall picture has been positive, showing US inbound travel to Europe is on the rise, there have been bumps in the road, and some months have shown a decline in travel numbers in response to external events.

The impact of Omicron saw a decrease in bookings from the US to Europe in December 2021 compared to the previous month, with flight bookings falling by over a third (33%).

However, this decline was temporary, with flight bookings from the US to Europe once again increasing in the New Year, with a marked rise of 51% in March 2022 vs February 2022.

But with the cost of living crisis beginning to bite and the US experiencing the highest inflation rise in 40 years, leaping from 8.6% in May from the year before, the impact on travel levels was felt the following month.

Trip.com data reveals that US travel booking to Europe fell by a notable 19% in June compared to the month before, perhaps indicating the recovery is not yet set in stone.

Booking values are still on the rise
Trip.com further analysed the average booking value of flights from the USA to Europe, and discovered these had increased by over a third (37%) in the first six months alone in 2022, versus the same period the year before.

As proof that American travellers were prepared to dig deeper into their pockets to pay for overseas travel following extensive travel restrictions, Trip.com data showed that at the start of this year, the average booking value of trips was on the rise, with spending up nearly a quarter (23%) in February 2022 compared to the previous month.

Trip.com reflects on its part played in a year of recovery

Trip.com shows how transatlantic travel has taken off

Travellers confidence has returned with city breaks and short-haul travel dominating according to Trip.com