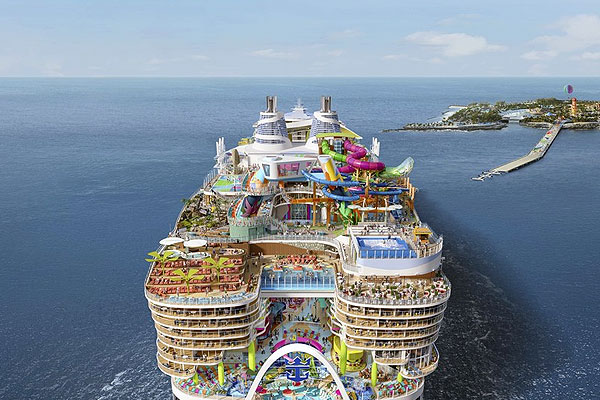 The Cruise Line hits all-time highs in a single day of reservations and the highest volume booking week.

MIAMI – In just under five weeks, Royal Caribbean International has set new bookings records yet again. This Black Friday was the cruise line's single largest booking day in its 53-year history, which marked the third time the record was broken in 2022 and the peak of what is now the brand's highest volume booking week. The strong demand and performance demonstrated by the two latest records come on the heels of the first look at the world's best family vacation, Icon of the Seas, and the record-breaking day reported when the highly anticipated ship opened for bookings 15 months ahead of its January 2024 debut.

Royal Caribbean’s Icon of the Seas is the first-of-its-kind combination of the best of every vacation. The first in the Icon Class has an all-encompassing lineup of firsts and next-level favorites for everyone across eight neighborhoods, including the new Thrill Island, Surfside – a neighborhood made for young families – and Icon’s best kept secret, The Hideaway.

In 2022, the cruise line marked both the single largest booking day and the highest volume booking week in April, which was followed by another record-breaking single day of bookings with the opening of Icon in October. The announcement of the newest records are celebrated along with a series of major, recent milestones for the brand, including the reveal of Icon as the first-of-its-kind combination of the best of every vacation and the arrival of Wonder of the Seas, the world's newest wonder, into its year-round home of Port Canaveral, Florida. More about Icon and the cruise line's new adventures across ships and private destinations will be revealed in the coming months.

Xhibition named agency of record for The Inn of The Five Graces, in Santa Fe