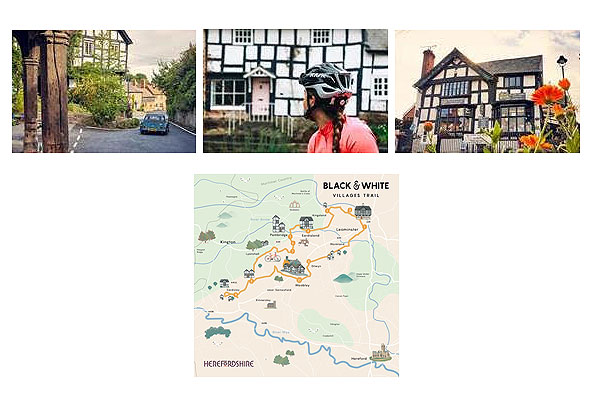 The trail, as the name suggests, is characterised by the large number of timbered and half-timbered houses in the area, some dating from medieval times.

With spring in the air, quiet country roads, a wealth of beautiful village architecture to explore and cider country about to explode with blossom, Visit Herefordshire is launching a reinvigorated Black & White Villages Trail with new handy online guides to experience it by bike, car or bus. Much of the route explores cider country.

Launched in the eighties as one of the first ‘Slow Travel’ touring routes in the UK, the Black & White Villages Trail is a circular touring route which was introduced as a way of connecting a little known cluster of picturesque villages in northern Herefordshire tucked between the wooded hills of the rivers Lugg and Arrow. The trail, as the name suggests, is characterised by the large number of timbered and half-timbered houses in the area, some dating from medieval times.

Now 40 years on Visit Herefordshire is breathing new life into the route launching an updated guide which can be downloaded here with a mini road trip of thirty-five miles for motorists while the route has been adapted to take in quieter roads and explore a slightly extended forty-two miles as a dedicated cycle route which can also be downloaded to Strava.

Whichever way visitors choose to explore the trail the online guide includes illustrated maps with places to sleep, eat and churches, galleries and castles to visit along the way, in addition to the new family itinerary, scenic loop walks from Weobley and Eardisland and even the option to spend a day exploring the trail by tandem bicycle or in a chauffeur driven classic car.

What’s more visitors are being encouraged to join in the #blackandwhitebuzz on social media and share their very best photography of these quintessentially English villages as they explore the trails.

The online guide also features a recommended two-day family itinerary with places where little ones can enjoy a paddle in the river, the wonky Tudor buildings, the chance to run around castle remains and enjoy homemade treats at a traditional tearoom.

Ways to enjoy the route:

Independently by bike
Bring your own bike and spend a leisurely couple of days cruising the lanes, stopping off to fill paniers with cider or perry and cheese from Monkland Cheese Dairy or the Green Bean Shop in Weobley where you can purchase Herefordshire Halloumi. Or hire a tandem and get double the pedal power, sleeping under beams along the way.

By vintage car staying at grade II listed Rowden Abbey
Check into the exceptional Rowden Abbey for two nights, just a few miles off the circuit, an Arts & Craft Grade II listed Black and White dating back to 1881 with oak panelled rooms, medieval lake and Victorian Arboretum as well as half a mile of meandering River Frome.

Choose from a collection of classic cars belonging to the owner to hit the trail in style chauffeur driven in a 1950s Bentley Continental Fastback or a 1958 Bentley Mark VI with a bottle of champagne to enjoy on board. Nostalgia for the grandparents and novelty for the kids makes this great for all ages.

By organised tour with Wheely Wonderful Cycling Holidays – by E or classic bike
Staying in the pretty village of Weobley and taking in a string of Black & White Villages over three days this self-guided cycle tour is a great option for those up to pedalling 20-30 miles a day. With plenty of time to stop off for cake, cheese, pub lunches and cider tastings and run wild at National Trust gardens.

Independently by bus or car
Scenic and slow, the new bus itinerary allows car free visitors to savour the villages, arriving in Leominster by train and then taking the 496/495 bus service which, handily, calls at a series of Black and White spots including villages of Pembridge and Eardisland and allows plenty of time for walks, pubs and tea rooms. Stay under the beams at Lowe Farm B&B just outside Pembridge where luxuries extend to a hot tub in the barn and incredible views and breakfasts.

Two Day Family Escape
Perfect for Harry Potter fans, the Black & White villages will conjure up Godric’s Hollow vibes and fire up the imagination of the whole family. Visit the community shop in Eardisland which is housed in a 17th century dovecote and walk along the river to find a brilliant place for stone-skimming.