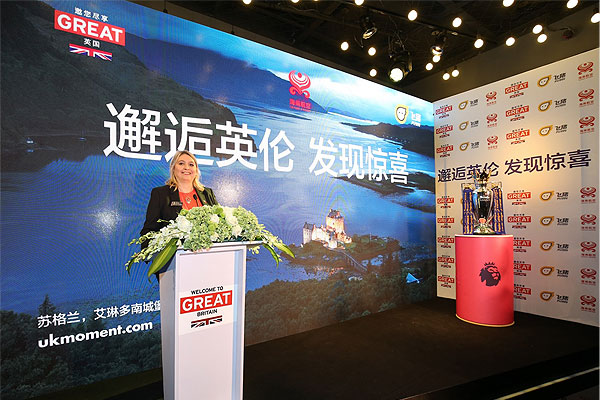 VisitBritain has celebrated its milestone partnerships with Hainan Airlines (HNA Group) and Alitrip, Alibaba Group’s tourism arm, in China. Both partnerships have been established to attract more Chinese visitors to Britain.

UK Government Secretary of State for Culture, Media and Sport Karen Bradley and VisitBritain Director b, who is leading a tourism delegation of companies from across Britain, today met with senior executives from Hainan Airlines and Alitrip at an event at Madame Tussauds in Shanghai, as part of the fourth UK-China People to People Dialogue.

HNA Group announced its latest application to the Civil Aviation Administration of China for five new airline routes into Britain following the new air service agreement between China and the UK. The Chinese cities to be connected directly with Britain are Changsha, Chengdu, Qingdao, Shenzhen and Xi’an, all to be serviced by HNA Group’s three subsidiary airlines including Hainan Airlines, Tianjin Airlines and Capital Airlines.

Hainan Airlines is the only Chinese airline with which VisitBritain has a long-term strategic partnership in China.

VisitBritain’s partnership with Alitrip, following a Memorandum of Understanding for Strategic Partnership signed in October, will create a virtual British marketplace on Alitrip’s digital platform, showcasing the diversity of UK tourism products directly to millions of Chinese consumers and also promoting great experiences and destinations across Britain to Chinese visitors, converting the inspiration to visit into bookings.

The event also shone the spotlight on football, with VisitBritain partnering with SuperSports, China’s official Premier League broadcaster, to launch a competition to find China’s biggest Premier League fan with the prize being a VIP football-themed trip to Britain.

UK Secretary of State for Culture, Media and Sport Karen Bradley said: "The UK is home to world-class museums, fantastic heritage sites and stunning countryside. This partnership between VisitBritain, HNA Group and Alibaba will make it even easier for Chinese tourists to enjoy the wonderful attractions the UK has to offer, and is another example of how we are doing business right across the globe."

VisitBritain Director Patricia Yates said that China, the world’s most valuable outbound market, was a huge tourism opportunity for Britain.

“We want to deliver a world-class visitor experience for Chinese customers. Working with commercial partners Hainan Airlines we’re making it easier to travel to Britain through increasing route connectivity and seat-capacity, a crucial part of our competitive tourism offer. And by amplifying our marketing reach in China with Alitrip, showcasing the diversity of experiences and destinations across Britain, we’re converting the inspiration to visit into bookings, driving our ambitious plans for growth.”

President of Hainan Airlines, Jianfeng Sun, said: “Hainan Airlines will make full use of the opportunities created by the Air Service Agreement to further explore and develop the British market together with VisitBritain. Currently, we have applied for direct routes to London from Chengdu, Changsha and Shenzhen. The three routes planned by Hainan Airlines, combined with Tianjin Airlines’ planned Tianjin-Xi’an-London route and Capital Airlines’ planned Qingdao-London route, means HNA Group aims to open a total of five routes to Britain within the next year. This is undoubtedly an important milestone in strategic cooperation for both sides and is the beginning of a brand new phase in the Sino-British tourism industry and airway development.”

Alitrip Senior Vice President, Jerry Hu, said: “Chinese tourists are showing more interest than ever before in visiting the UK and are looking for new ways to experience popular and undiscovered British destinations. This trend also means that as more Chinese tourists visit the UK, they will interact with British brands and discover new shopping experiences in the region. The UK National Tourism Pavilion on the Alitrip platform will reach more than 200 million Alitrip users through a variety of cultural and tourism resources, combined with innovative e-travel products and packages – introducing potential Chinese tourists to all the UK has to offer as a top international tourism destination. Through the pavilion, they will learn about the UK, fall in love with the UK and ultimately make the UK part of their future or current travel plans.”

Chinese visitors stay longer and travel more widely across Britain than other international visitors, averaging 15 nights compared to eight for other visitors, with more than half of this time spent outside London. They are some of the highest spending visitors to the UK, spending on average £2174 during each visit, more than three times the average visitor. Every 22 additional Chinese visitors that Britain attract supports an additional job in tourism in the UK.

Last year was a record-breaking year for visits from China to the UK with 270,000 visits, 46% up on the year before, with spend up 18% to £586 million – moving China into Britain’s top 10 most valuable inbound markets for the first time.

VisitBritain has ambitions to double spend from Chinese visitors to £1 billion by 2020. It is positioning Britain as the destination of choice for Chinese visitors through its GREAT China Welcome Programme, international GREAT marketing campaigns and annual trade events to China, the most recent and largest held just last month in Shanghai.

In August UK Prime Minister Theresa May launched a Tourism Action Plan to ensure that Britain remains a top destination for visitors from across the globe.

New VisitBritain Chairman calls for a “coalition of the willing,” when discussing latest plans for visitor economy at Experience Oxfordshire event

Malibu Beach Inn joins The Leading Hotels of the World

After the success of the past staging, FESTITUR is back with an extensive programme