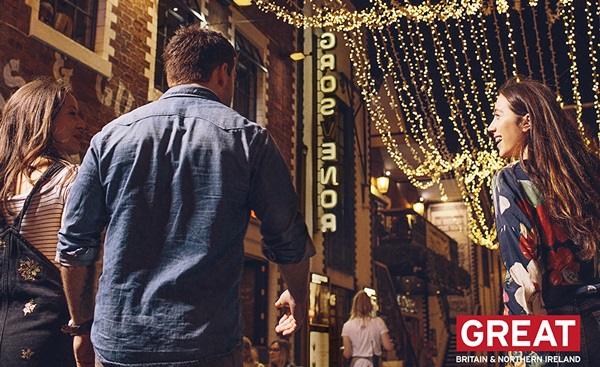 Part of the UK Government’s GREAT Britain campaign Join the World – Discover the UK is expected to generate more than one million additional overnight stays with an £80 million boost to the economy.

A UK-wide tourism campaign is launching to inspire young people from Great Britain and Northern Ireland to take a holiday at home.

Statistics show that 16-to-34 year olds took almost 1.4 million fewer holidays at home last year compared to a decade ago.

VisitEngland’s £2.5 million ‘Join the World – Discover the UK’ digital and social media campaign, launching on Monday 11 September, is targeting this ‘lost generation’ using overseas social media influencers and travellers to showcase to their peers the amazing moments and experiences that can only be had on a holiday at home in the UK.

The campaign is run in partnership with the national tourism organisations of Northern Ireland, Scotland and Wales and tourism businesses and destination management organisations across the UK.

Part of the UK Government’s GREAT Britain campaign Join the World – Discover the UK is expected to generate more than one million additional overnight stays with an £80 million boost to the economy.

UK Government Minister for Tourism John Glen said: “There is an incredible amount to see and do across the whole of the UK and we want to inspire more young people to take in our world-class attractions, sites and cities.

"Tourism boosts our economy, creates jobs and supports local businesses. By showcasing the exciting and diverse range of trips on offer I hope it will encourage many more young people to explore the UK.”

VisitBritain/VisitEngland Chief Executive Sally Balcombe said: “From moonlight kayaking in Northern Ireland and mountain-biking down Elan Valley in Wales to a night-out in the vibrant Ashton Lane in Glasgow and craft-beer experiences in Yorkshire, the UK is packed full of amazing moments.

“We want young people to take a new look at the sheer diversity and quality of activities and experiences right here on our doorstep and inspire them to book a short-break, boosting seasonal tourism and spreading its economic benefits across the UK.”

Join the World – Discover the UK kicks off with the launch of five short films and images showcasing experiences in London and Yorkshire in England, Strangford Lough in Northern Ireland, Glasgow in Scotland and Elan Valley in Wales, through the eyes of international travellers. These are being promoted across digital and social media channels Facebook, Instagram and Snapchat and dozens of digital billboards throughout the UK.

The campaign drives online ‘traffic’ to a hub on www.visitbritain.com/jointheworld featuring blogs and user-generated content showcasing seasonal events, activities and experiences. Visitors can upload images of their own amazing moments on social media using #lovegreatbritain and #loveUK for the chance to feature on the hub. Short-films created by a French social media influencer on a foodie trip to Northern Ireland and a Canadian influencer on a city-trip to Bristol launch in October.

The campaign runs throughout the year with peaks in paid media activity targeting the shoulder seasons to encourage young people to take short-breaks in the UK, boosting travel during the quieter seasons.

Join the World – Discover the UK marks the sixth year that VisitEngland has run a campaign to boost domestic tourism and get people out exploring the UK with former promotions featuring Wallace & Gromit, Shaun the Sheep and celebrities.

Tourism is worth £127 billion to the UK economy.

MrGamez: Netherlands is the world’s most fun destination