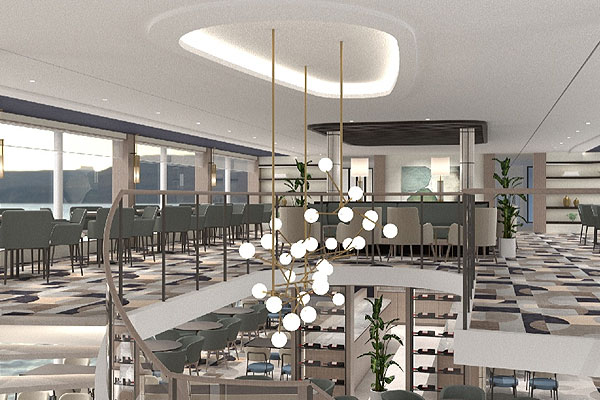 New ship sets sail in April 2023 featuring addition of one shore excursion in each port of call as part of its all-inclusive product range; plus, new routes and themed offerings added to VIVA Cruises’ 2023 program.

FORT LAUDERDALE, FLORIDA – European river cruise brand, VIVA Cruises, announced the release of its distinctive line-up of cruises for 2023 along with the launch of its second new-built ship, VIVA TWO. Plus, on the heels of the company’s the official launch of sales in the North American travel market, VIVA Cruises is expanding its contemporary premium all-inclusive river cruises with the additional inclusion of one experiential shore excursion in each port of call as part of its cruise offering. Further, VIVA Cruises is pleased to introduce new and innovative routes for 2023, all of which are currently available for booking online.

Launch of VIVA TWO & Inclusion of Shore Ex in Each Port
The time-honored cruise brand is a favorite across Europe, backed by its cruise-pioneering parent Scylla that shares its tradition of excellence in river and expedition cruising since 1973. Following the launch of VIVA ONE earlier this year, VIVA TWO will be VIVA Cruises’ second new-build ship. It will feature 95 stylish and comfortable cabins, including eight suites, that will reflect the casual yet chic lifestyle of VIVA Cruises. VIVA TWO will showcase three restaurants: VIVA’s Bistro, offering a casual atmosphere and a wide selection of snacks and smaller dishes available from early morning until late at night – as well as a prime view from the back of the ship; Riverside, the main restaurant – serving a wide selection of breakfast, lunch, and dinner menus; and MOMENTS, the place to go for top-flight specialty food accompanied by light entertainment. All dining options will be included in the cruise package as part of the VIVA All-Inclusive product, which also includes snacks, full board, high-quality alcoholic and non-alcoholic beverages, self-service coffee stations and water stations, minibar, beauty products from the Rituals lifestyle luxury cosmetic brand, free Wi-Fi, and all tips and gratuities. Additionally, as part of the North American product offering, all cruises will feature one exciting shore excursion in each port of call.

Maiden Voyage of VIVA TWO
VIVA TWO’s 7-night Maiden Voyage will set sail from Frankfurt on April 1, 2023, heading upstream along the Main River. Passing through cities including Bamberg, Nuremberg, and Regensburg, the maiden voyage will take travelers exploring along the Danube to the three-river city of Passau, the itinerary’s final destination. Pricing for the Maiden Voyage will start at $2,350 USD per person.

Andrea Kruse, COO of VIVA Cruises said, “After the launch of VIVA ONE this year, the launch of our second new-build ship – VIVA TWO – is another important highlight in the history of VIVA Cruises. We are truly delighted to be celebrating this exciting milestone for the company and look forward to welcoming travelers aboard our nine ships available in 2023.”

Expanding Routes in 2023 & Themed Cruises
From 2023, VIVA Cruises is also set to expand its extensive offering on the Rhine, Main, Moselle, Danube, Rhône, Seine, and Baltic Sea. Sailed by VIVA TIARA, new routes will be offered including a ten-night cruise between Dusseldorf and Regensburg, in Germany, passing through the Rhine, the Main, and the Danube rivers. VIVA ONE and VIVA MOMENTS will also be expanding their itineraries with one-way services from Düsseldorf to Basel, Basel to Amsterdam, Amsterdam to Basel and Basel to Düsseldorf.

In addition to VIVA Cruises’ classic river routes, 2023 will also see the comeback of the company’s “themed cruises” running from January to March. These include VIVA Cruises’ wellness itineraries featuring lower carb meals, a complimentary 30-minute massage, and unlimited use of fitness facilities; city trips to Belgium and the Netherlands; and “Crime Mystery Cruises” to Berlin and Düsseldorf. VIVA Cruises will be also offering Advent, Christmas, and New Year’s Eve short excursions showcasing such seasonal elements as locally acclaimed Christmas Markets.