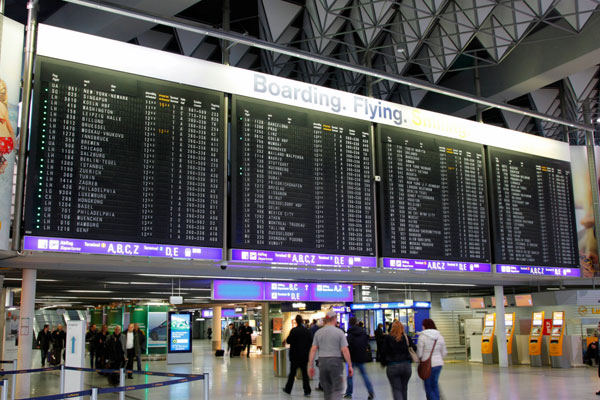 New routes to Africa added to Frankfurt’s flight network. Numerous destinations in the Caribbean and Central America; European and North American services to be continued this winter.

On October 30, the flight schedule for the 2022/23 winter season will come into effect at Frankfurt Airport (FRA): a total of 82 airlines will serve 246 destinations in 96 countries worldwide*. Frankfurt will thus continue to be Germany’s largest and most important aviation gateway, offering the broadest range of flight connections. About 50 per cent of the destinations served are outside Europe, a fact that underscores Frankfurt Airport’s role as an international air traffic hub. The winter flight schedule will remain in effect until March 25, 2023.

FRA’s winter schedule currently features 3,530 weekly passenger flights (departures) on average. That is six percent less than in the 2019/2020 pre-pandemic winter season but 32% more than in the corresponding period of 2021/22. Of these, 495 flights will operate on domestic German routes, while 2,153 will serve other European airports, and 882 will fly to destinations on other continents. There will be a total of about 636,000 seats available per week, only nine percent less than the corresponding figure for 2019/2020 and 33% more than in 2021/2022.

New Routes to Africa
Starting in November, German airline Eurowings Discover (4Y) will launch a new route from Frankfurt to Mbombela (MQP) in South Africa. The airport serves as the gateway to the famous Kruger National Park. In the upcoming winter season, the airline will operate three flights a week from FRA to MQP with a stopover in Windhoek (WDH), Namibia. German leisure carrier Condor (DE) is also expanding its flights to Africa, once again including direct links to the island of Zanzibar (ZNZ) in Tanzania and to Mombasa (MBA), Kenya’s second-largest city. In addition, Condor is launching flights to Cape Town (CPT) and Johannesburg (JNB) in South Africa, thus complementing the existing services operated by the Lufthansa Group.

Various popular holiday destinations in the Caribbean and Central America are now also available from FRA again: Condor will introduce a once-weekly service to Tobago (TAB) that continues on to Grenada (GND). Eurowings Discover and Condor will each operate up to two daily flights to two traditional winter getaways: Punta Cana (PUJ) in the Dominican Republic and Cancún (CAN) in Mexico.

The U.S. and Canada will also be well connected: eight airlines are serving up to 26 destinations in those countries from FRA during the winter season. In addition to offering flights to many major cities, Lufthansa (LH) will continue services to St. Louis (STL), Missouri, three times a week. And for the first time during the winter months of the year, Condor will provide two weekly services each to Los Angeles (LAX) and Toronto (YYZ).

Many airlines also continue to offer flights from Frankfurt to destinations in the Middle East and South and East Asia. Depending on the further lifting of pandemic-related travel restrictions in some Asian countries, flight frequencies to these destinations may be further increased. For travelers to and from India, the country’s Vistara (UK) airline is doubling its offering to New Delhi (DEL) from three to six flights a week.

Many airlines will also continue flying several times a day from FRA to all major European cities during the winter season. Passengers looking for warmer climes, will find a range of flights to holiday destinations in Southern Europe – including the Balearic and Canary Islands, Greece and Portugal, as well as Turkey.

Spaces at The Spine to host micebook Ventures22