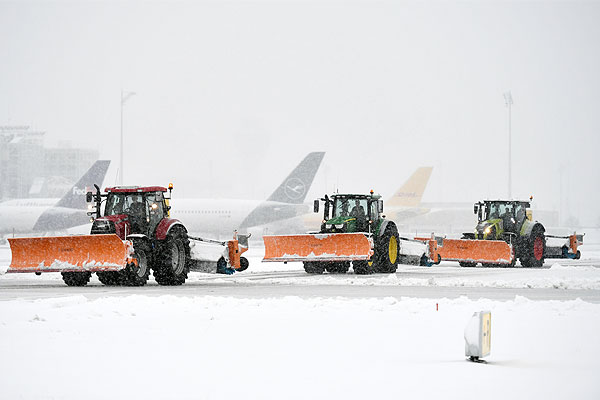 In order to ensure safe flight operations even under strong weather conditions, Munich Airport has a winter service team standing by from early November to mid-April.

In order to make airport operations as smooth and safe as possible, large areas have to be cleared when snow falls. The two runways, the aprons, and the taxiways alone make up around 5.6 million square meters, the equivalent of more than 780 soccer fields. It takes around 30 minutes to clear a runway at Munich Airport.

The fleet comprises tractors with snowplows attached as well numerous special vehicles, including 22 sweepers, six rotary snowplows and two snowcats. The cleared snow is deposited at six specially appointed snow disposal sites. Up to 2.2 million cubic meters of snow are collected here every season. An underground collecting tank ensures that the melted snow is not released into the environment.

During the COVID-19 pandemic, the employees working in winter service have been protected by extensive hygiene measures. For example, the operatives have the use of several break rooms so that they can maintain social distancing.

The winter service team is alerted by Airport Operations at Munich Airport, which monitors the condition of the movement areas around the clock. As well as the latest forecasts from Germany’s National Meteorological Service, Airport Operations is assisted by an early warning system for black ice, which gathers continuously updated data from a total of 18 measuring stations across the airport. In addition, special vehicles are used to regularly check the braking conditions on the runways.

Owing to environmental protection concerns, the mechanical clean-up of road surfaces is a priority. The use of surface de-icers is only necessary when the movement areas are at risk of icing over. On some of the surfaces, silica sand is used instead of de-icing fluid. Channels along both sides of the runways catch the runoff and carry it to a meltwater retention basin. From here, the meltwater is conveyed to the treatment plant in the town of Eitting in a controlled manner.

It is not only the airport’s road surfaces that have to be kept in safe operational condition during the cold season. Aircraft must also be freed of ice and snow before take-off. This is carried out by the “polar bears” of EFM (Gesellschaft für Enteisen und Flugzeugschleppen am Flughafen München mbH), a subsidiary of Deutsche Lufthansa AG and Munich Airport. “Polar bears” are special vehicles that spray the aircraft with de-icer immediately before take-off. EFM de-ices up to 15,000 aircraft – from Learjets to Airbus A380s – per year. The used de-icer is collected and mostly recycled.