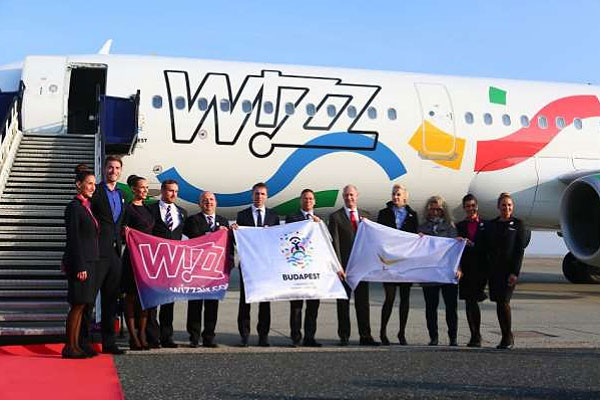 Wizz Air, in partnership with Budapest Airport and the Budapest 2024 Olympic and Paralympic Bid, revealed the livery of its Budapest aircraft.

As part of its support towards the Budapest 2024 Olympic and Paralympic bid, Wizz Air has decorated one Airbus A321 and one Airbus A320 aircraft of its Budapest fleet with unique livery carrying Budapest 2024 design elements. The elements reflect the waves of the Danube River that flows through the heart of the city, as well as the historic monument of the Statue of Liberty located on one of the highest hills of the Hungarian capital.

The A321 Budapest 2024 livery design aircraft joined the fleet on 24 November, followed shortly by an A320 aircraft that will start operating commercial flights from 1 December 2016. Both aircraft will feature the new Budapest livery for the entire duration of the Olympic and Paralympic bid, until 31 August 2017.

Being the home-based airline of Hungary, Wizz Air is constantly expanding its operations in Hungary. The airline currently operates two Hungarian bases, in Budapest and Debrecen, with a total of 11 aircraft in the country. Recently announcing an additional aircraft to join the Budapest fleet from April 2017, the carrier employs more than 1,000 people in flight crew, cabin crew, office and supporting functions. Over the past 12 months, Wizz Air carried 3.4 million passengers on its low-fare Budapest routes, further supporting over 2,300 local indirect jobs. Wizz Air has already announced four new routes to be launched in 2017, including such attractive destinations like Faro, Hanover, Bergen and Lamezia Terme. Being a strong supporter of sports and active lifestyle, this year’s Wizz Air Budapest Half Marathon was held for the third time, attracting over 13,500 runners from all over the world to the Hungarian capital.

To mark the revealing of this special livery, Wizz Air is launching a “Spot the Budapest Plane” competition, calling on all plane lovers to keep an eye out for the special Budapest aircraft. Take a photo of the Budapest 2024 livery design aircraft and post it on Instagram with the #WIZZBudapest2024 hashtag. The two best photos will each be awarded a €200 Wizz Air Value Voucher and a special gift package.

Speaking at a press conference in Budapest, Jozsef Varadi, CEO, Wizz Air said: “As an airline with its roots in Hungary, we are proud to contribute today to building and further promoting the Budapest brand internationally. Since 2004, when the airline took off for the first time, we have earned the loyalty and trust of close to 18.5 million passengers in our Hungarian route network, and this year we will achieve a record number of passengers per year ever carried by an airline to and from Hungary. Wizz Air’s Budapest aircraft, with the Budapest 2024 livery design, will help create international buzz and inspire people to visit Budapest, as we continue to grow capacity and expand our route network in Hungary.”

“As a main sponsor of this historic bid, we are proud to welcome the new Wizz Air Budapest 2024 livery designed A321 aircraft to our airport, where it will be seen by hundreds and thousands of people from all around the world daily,” said Jost Lammers, CEO, Budapest Airport. He added: “Together with Wizz Air and the 10,000 strong community of employees at the airport, we will do everything to help the success of Budapest’s Olympic Bid for hosting the 2024 Games. Our biggest contribution to this noble cause is our 50 billion HUF (170 m EUR) BUD 2020 airport development program, as well as our sport initiatives, like the unique and successful annual BUD:Runway Run.”

“I have been to many international competitions,” said Emese Szasz, Olympic champion at the 2016 Rio Games in women’s epee fencing, “and I feel that to host the Olympic Games in Budapest would be really special. Generally, it takes a long time to travel between the Olympic village and the competition venues. On the contrary, in Budapest it would take an average travel time of 12 minutes between the different competition venues for the athletes…then how much time would be left for everything else, to train, to prepare, to rest? For the fans, the Olympic Games in Budapest would be a great experience, because in addition to the competition, they can learn about our amazing buildings and our gastronomy; they can feel the sport festival atmosphere – something we are famous for – and experience the bottomless enthusiasm of Hungarian fans.”

"Budapest is experiencing a renaissance from every aspect, it is a city that constantly renews itself and is truly on the rise. Hosting the 2024 Games would speed up the economic catching up of Budapest and Hungary by 25 years, and according to economic analyses of hosting the Games we would need to spend half a percent of the country's budget between 2017 and 2024 for getting back three times as much within 15 years," said Balazs Furjes, Head of the Budapest Olympic and Paralympic Bid. He added: "In order to host the games we would only need to implement those developments that would be necessary even without the Games, however, hosting the Olympics would guarantee that these developments will indeed be finished.”