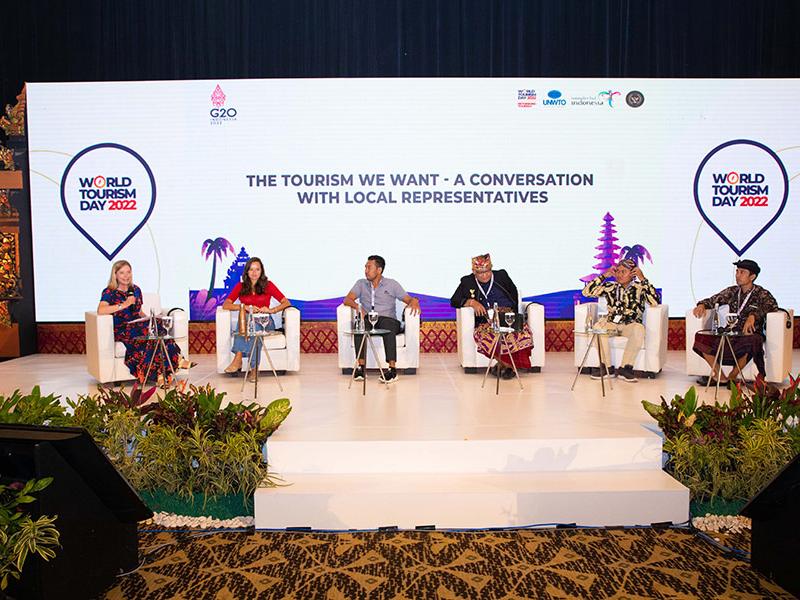 Hosted by the Islamic Republic of Indonesia, in the popular destination of Bali, the official celebrations brought together leaders from across the public and private sector.

Positive transformation for both people and planet was the central message of World Tourism Day 2022. Held around the theme of ‘Rethinking Tourism’, the Global Day of Observation emphasized the sector’s unique potential to drive recovery and deliver positive change for people everywhere.

Hosted by the Islamic Republic of Indonesia, in the popular destination of Bali, the official celebrations brought together leaders from across the public and private sector, including the largest and most diverse number of Ministers of Tourism in the history of World Tourism Day. They were joined by tourism stakeholders around the world celebrating in their own countries, united around the timely theme of rethinking and transforming the sector.

Seizing the opportunity
Opening the celebrations, UNWTO Secretary-General Zurab Pololikashvili stressed the unique opportunity presented to tourism to pause, reflect and recalibrate. He said: “The restart of tourism everywhere brings hope. It is the ultimate cross-cutting and people-to-people sector. It touches on almost everything we do – and everything we care about. Tourism’s potential is now recognized more widely than ever. It’s up to us to deliver on this potential.”

Joining UNWTO in emphasizing the potential of tourism to deliver wide-reaching change, the Minister of Tourism for the Republic of Indonesia, Sandiaga Uno, noted: “The most important assets in tourism are its people and the planet. We must ensure the best support for both.” In Bali, UNWTO commended Indonesia for going beyond words and taking concrete steps to transform tourism, notably by becoming the first country in the Asia and the Pacific region to sign up to the ambitious Glasgow Declaration on Climate Action in Tourism and its goals to reach Net-Zero emissions for the sector by 2050 at the latest."

Also adding his voice to the celebrations, United Nations Secretary-General António Guterres said: “Tourism has the power to foster inclusion, protect nature & promote cultural understanding. We must rethink and reinvent the sector to ensure its sustainability.”

World Tourism Day Report Launched
To mark the day, UNWTO launched its first World Tourism Day Report, the first in an annual series of updates and analysis of the Organization’s work guiding the sector forward. The inaugural report is titled “Rethinking Tourism: From Crisis to Transformation”, reflecting the timely relevance of the 2022 theme as well as the unprecedented crisis that hit the sector in 2020.

The report charts UNWTO’s work uniting the sector in the face of crisis, leading tourism’s response and laying the foundations for a more inclusive and resilient future, with updates on work in every global region as well as in key areas including gender equality, sustainability and climate action, tourism governance and investments and innovation.

UNWTO Delivers Guidelines to G20
On the eve of World Tourism Day, UNWTO also presented the G20 Guidelines on Strengthening MSMEs and Communities as Agents of Transformation in Tourism on the occasion of the G20 Tourism Ministers Meeting in Bali. The Guidelines provide guidance for key policies that can create resilient and sustainable MSMEs and communities around the pillars of human capital, innovation, youth and women empowerment, climate action, and policy, governance and investments. They also draw up over 40 cases studies from G20 members and guest countries focused on the promotion of MSMEs and communities.

Five ways to spend quality time with your family