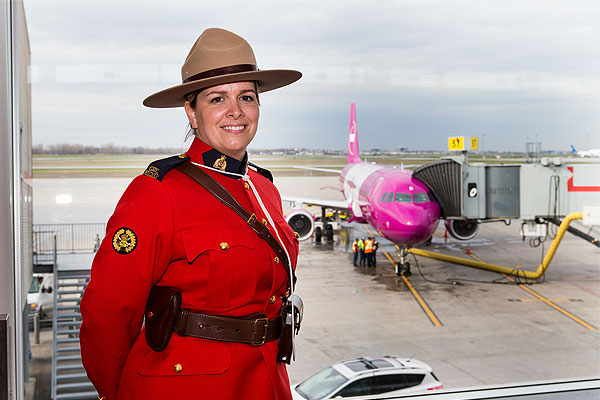 Service from Toronto starts May 11th.

MONTREAL – WOW air, Iceland's ultra low-cost airline, received a warm Canadian welcome as one of its bright purple planes touched down on Canadian soil for the very first time. As passengers on the inaugural flight arrived at the gate, they were greeted by a member of the Royal Canadian Mounted Police, making it a true Canadian welcome.

"I'm thrilled to be aboard the first WOW air flight to Canada, and to start connecting Canadians with Europe at super low fares," said Skuli Mogensen, sole owner and CEO of WOW air. "The fact that the first plane is touching down in Montreal -a city I lived in for nearly a decade- makes this extra special, as Montreal means a lot to me and my family."

WOW air announced its entry into the Canadian market in October 2015, at the same time tickets went on sale. "We've been so pleased with the demand that we made the decision to increase capacity on both of our Canadian routes," said Mogensen. "We are excited about the response to our super-low fares that start at $99 CDN, and will continue adding even more interesting destinations across Europe at great prices for Canadian travellers, which already includes cities such as Paris, Lyon, London and Frankfurt, to name a few."

Originally launched in November 2011, flights to Iceland and other European destinations will depart Toronto's Pearson (YYZ) and Montreal's Pierre Elliott Trudeau (YUL) via Reykjavik, offering travellers the cheapest connection between Europe and Canada. They will be operated using WOW air's fleet of new Airbus A321 Extended Range aircraft. The airline's Airbus A320 and Airbus A321 family of aircraft will carry passengers between Reykjavik and other European destinations.