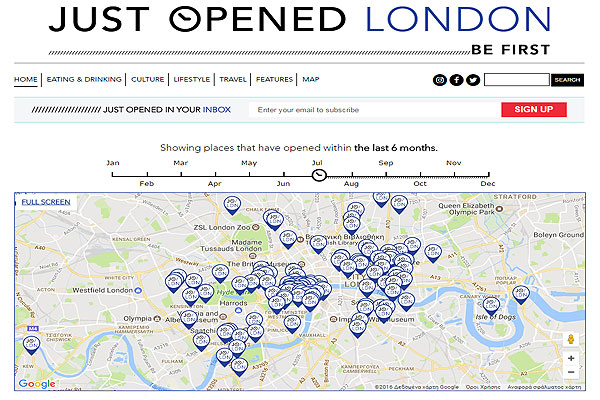 The go-to place for the latest lifestyle openings announces revenue growth of 120%.

LONDON – Just Opened Group, the go-to place for the hottest openings in the world’s best cities, has announced an ambitious global expansion plan as a result of the burgeoning experience economy. Currently available in London and New York, plans to become the leading international travel guide across major cities with key launches planned in Los Angeles and Singapore for early 2017 and multiple city launches continuing through to 2020.

As the experience economy continues to grow in popularity, particularly amongst millennials – Just Opened is reaping the rewards achieving year-on-year revenue growth of 120%. Established in 2013 Just Opened has rapidly established itself as a trend expert in the lifestyle sector covering the latest and greatest in London, such as Temper, Kiln and Dinerama. “At Just Opened, it’s essential our finger is on the pulse of the hottest launches, immersive experiences, and events, so we can provide the best insight for our Members”, highlights James Marchant, Co-Founder and CEO of Just Opened Group. “Shared experiences are growing in popularity – where once eating out was seen as a formal occasion over the last twelve months we’ve noticed the huge success of communal eating and drinking spaces, which truly capture this spirit. As well as providing a vast variety of food and drink, these spaces offer a relaxed, informal and sociable environment – a trend which is being captured in the latest restaurants which I expect to continue in 2017.”

The experience economy has resulted from a major shift in consumer behaviour. With a higher disposable income individuals are moving away from owning goods to spending more on recreation and culture, resulting in spending increasing year-on-year by over 9%. Driven in part by the rising popularity of social media as more users share bigger and better experiences, online shopping has provided more opportunity for consumers to pre-order activities.

Further tapping into consumers’ curiosity to try new things, Just Opened offers a membership scheme not only keeping Members abreast with the latest openings but inviting them to curated events and tastings across London at the likes of Busaba, Old Street Records and Roma, and delivering exclusive weekly offers throughout the city. Just Opened not only provides insight for consumers but is a launch and promotional partner for lifestyle businesses worldwide. These businesses include restaurants, bars, theatres, art galleries and hotels; all of which are integral to the experience economy.

“Just Opened cuts through the noise generated around the latest launches to provide valuable insight for the discerning consumer looking to enjoy the best of what has just opened,” remarks James. “We know that cities offer a great range of experiences across the lifestyle space and we’ve already had demonstrable success in London and New York. As such, we’ll be launching in Los Angeles and Singapore early next year, bringing new and existing customers to new markets and new experiences”.