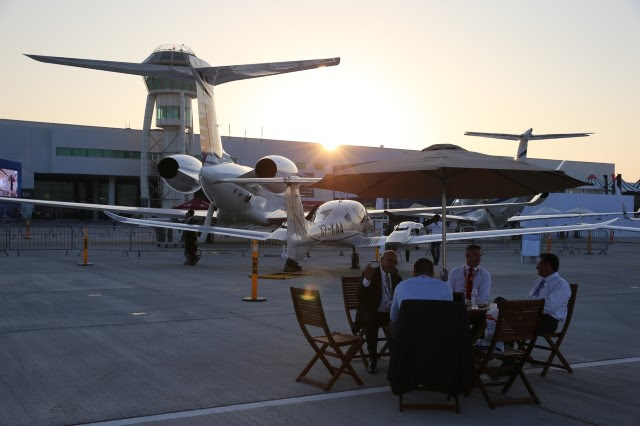 The sun setting behind exhibitors doing business on the final day of the MEBAA Show.

The biggest MEBAA Show to date finished on Thursday after a week characterised by bigger jets, bigger deals and bigger visitor numbers.

Ali Ahmed Alnaqbi, Founding Chairman of the Middle East & North Africa Business Aviation Association, said: “It's been an outstanding week. I have been extremely impressed with the growth in exhibitors, visitor growth and the increase in the number of aircraft on static display. The MEBAA Show has put the region's business aviation industry in the spotlight once again, as we work towards better representation of the sector's interests in the wider global aviation community.”

The MEBAA Show welcomed 460 exhibitors, including organisations from the UAE, Middle East, Europe, North America, Asia and Africa, and 9042 attendees.

The many  new exhibitors enjoyed the high quality of visitors, with Abu Dhabi start-up GI Aviation receiving its Air Operator’s Certificate [AOC] from the GCAA (UAE General Civil Aviation Authority), enabling the start of commercial flights with its fleet of Pilatus PC-12NG aircraft.

Also new to the 2016 edition, Click Aviation Network's complete trip support services attracted a great deal of interest. The Dubai-based company, which launched in 2015, plans to create a network whereby charter brokers, operators, suppliers and other service providers can come together under one roof, and work together to increase operational efficiency and business growth, eliminate risks, reduce costs and build credibility, according to CEO and Founder, Aiham Bader.

Riyadh, Saudi Arabia-headquartered Sky Prime Aviation Services made a dramatic event debut with two aircraft on display, an Airbus A340-200 and an Embraer Legacy 500. Having launched just one year ago, the company now owns a 13-strong fleet, including a mix of Airbus corporate single-aisles and widebodies, along with Gulfstreams and Embraers. Sky Prime is already describing itself as the largest private aviation company in the Middle East.

The four-living-area G650ER headlined Gulfstream’s presence, “showcasing the company’s commitment to exceeding customers’ expectations for customisation, comfort and craftsmanship,” according to Mark Burns, president, Gulfstream, who added that: “we have more than 120 aircraft based in the Middle East and North Africa. With this growth, we continue to invest in product support capabilities throughout the region, including expanding our parts and materials inventory at Dubai World Central.”

Greenpoint Technologies, a Zodiac Aerospace Company, chose The MEBAA Show to reveal its 1/20th scale VIP 747-8 model for the first time in the Middle East. The model features Greenpoint’s patented Aerolift, an elevator that permits access from the ground to the main deck, and the Aeroloft, which provides additional passenger sleeping suites above the main deck.

“The MEBAA Show is an excellent venue to strengthen relationships. It’s an intimate setting where we can discuss challenges experienced by owners and offer realistic solutions,” said Greenpoint Executive Vice President Bret Neely.

Meanwhile US companies had the largest presence at The MEBAA Show, with retired US Ambassador to the UAE, Michael Corbin, representing US Pavilion organiser, Kallman Worldwide, saying: “The MEBAA Show is an excellent opportunity for US companies to come and discuss the business opportunities, and provides a central location where business gets done. We see a number of US companies returning, while others are here for the first time, and we have the US Commercial Service here to offer its support to our exhibitors.

“As the only national pavilion at The MEBAA Show, the US commitment to exploring mutually beneficial opportunities here speaks for itself,” concluded Corbin.

The MEBAA Show takes place every two years at DWC, Airshow site, with the next edition running from 10-12 December 2018. Next year sees the second edition of the MEBAA Show Morocco, on 12-13 September 2017.

2020: The year for business aviation

MEBAA Show looks to the future