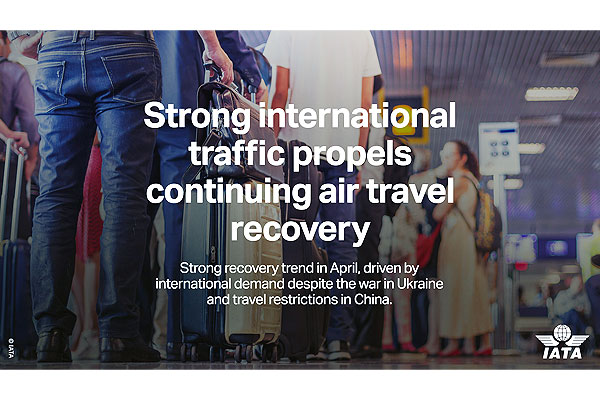 GENEVA – The International Air Transport Association (IATA) announced that air travel resumed its strong recovery trend in April, despite the war in Ukraine and travel restrictions in China. This was driven primarily by international demand.

Total demand for air travel in April 2022 (measured in revenue passenger kilometers or RPKs) was up 78.7% compared to April 2021 and slightly ahead of March 2022’s 76.0% year-over-year increase.

“With the lifting of many border restrictions, we are seeing the long-expected surge in bookings as people seek to make up for two years of lost travel opportunities. April data is cause for optimism in almost all markets, except China, which continues to severely restrict travel. The experience of the rest of the world is demonstrating that increased travel is manageable with high levels of population immunity and the normal systems for disease surveillance. We hope that China can recognize this success soon and take its own steps towards normality,” said Willie Walsh, IATA’s Director General.

“With the northern summer travel season now upon us, two things are clear: two-years of border restrictions have not weakened the desire for the freedom to travel. Where it is permitted, demand rapidly is returning to pre-COVID levels. However, it is also evident that the failings in how governments managed the pandemic have continued into the recovery. With governments making U-turns and policy changes there was uncertainty until the last minute, leaving little time to restart an industry that was largely dormant for two years. It is no wonder that we are seeing operational delays in some locations. In those few locations where these problems are recurring, solutions need to be found so passengers can travel with confidence.

“In less than two weeks, leaders of the global aviation community will gather in Doha at the 78th IATA Annual General Meeting (AGM) and World Air Transport Summit. This year’s AGM will take place as a wholly in-person event for the first time since 2019. It should send a strong signal that it is time for governments to lift any remaining restrictions and requirements and prepare for an enthusiastic response by consumers who are voting with their feet for a full restoration of their right to travel,” said Walsh.

Note: We have returned to year-on-year traffic comparisons, instead of comparisons with the 2019 period, unless otherwise noted. Owing to the low traffic base in 2021, some markets will show very high year-on-year growth rates, even if the size of these markets is still significantly smaller than they were in 2019.