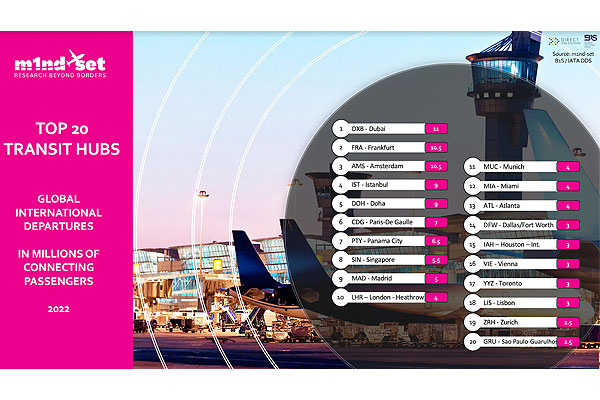 Spain and Switzerland are the only two countries among the top ten nationalities that have seen a full recovery for international traffic, attaining and even moderately surpassing pre-pandemic levels.

Spain and Switzerland are the only two countries among the top ten nationalities that have seen a full recovery for international traffic, attaining and even moderately surpassing pre-pandemic levels. The average recovery rate among all top ten nationalities compared to 2019 is 75% with France at 90% of 2019 levels, and the Netherlands and Germany at around 80%.

The top 20 nationalities for international travel in 2022, according to the m1nd-set B1S traffic monitor include, from eleventh to twentieth position, Russia, Belgium, Poland, Ireland, Mexico, Turkey, Denmark, Portugal, Greece and Sweden.

The third benchmark ranking in m1nd-set’s annual B1S traffic monitor reveals that the top 20 airlines for passenger numbers have recovered 81% of traffic during the first ten months in 2022, January to October, compared to the same period of 2019. Ryanair continues to lead the ranking with just over 100 million passengers, above pre-pandemic levels at 104%. Easyjet follows in second place with less than half of Ryanair’s traffic, at 48 million international passengers from January to October in 2022, 78% of its pre-pandemic level in January to October 2019.

The top twenty airline ranking for airline passenger numbers from January to October 2022, is completed by United Airlines in eleventh place, followed KLM, Air Canada, Delta and Jet2.com from twelfth to fifteenth position and Eurowings, Vueling, Pegasus, Saudia and Copa Airlines from sixteenth to twentieth position.