Newsletter
HomeSpecial Interest TravelOtherAnnouncing Bebe Voyage Trails: Tours you can realistically do with a baby in a day
Family travel

Announcing Bebe Voyage Trails: Tours you can realistically do with a baby in a day 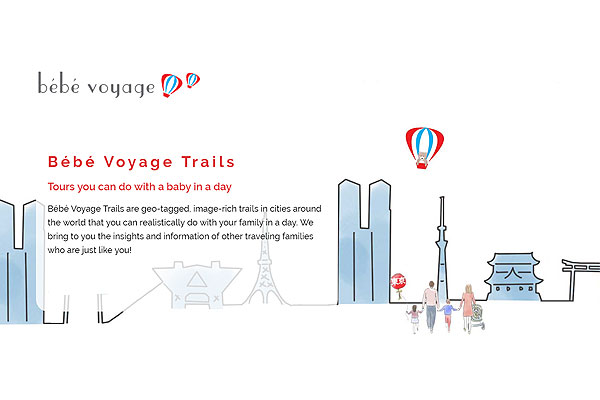 Bebe Voyage Trails not only offer concrete family-friendly ideas, but they also help users plan their day to the last detail.

Bebe Voyage, the premiere community of globetrotting parents, together with Crumbdrop, a technology platform that generates instant animated slideshows, releases Bebe Voyage Trails. After three years of listening to the over 10,000 members in the Club, the Bebe Voyage Team identified that one of the greatest needs its community has is knowing what to do when you arrive in a new city – with babies and toddlers in tow. As a complement to their Traveling with Toddlers Travel Guide Series, Bebe Voyage took it a step further by creating geo-tagged, image-rich family-friendly trails in cities around the world. Created with local ambassadors, moms and dads who like to explore and share their travel hacks, Bebe Voyage has launched trails in seven major cities: Paris, London, Chicago, Tokyo, Sydney, Stockholm, and Reykjavik.

Bebe Voyage Trails not only offer concrete family-friendly ideas, but they also help users plan their day to the last detail. They make visiting families with children feel like a friend is walking them around their city, offering insider tips and showing off their favorite places. Before heading out on the trail, users know whether the trail is stroller-friendly, what their budget should be, whether they will need to book ahead, a sense of timing, what weather to take the trail on, and anything else they might need to know ahead of time-making traveling that much easier.

The initial launch includes 18 trails across seven cities for curious, adventurous families. These trails are housed on the newly redesigned Bebe Voyage website which also includes travel guides for the aforementioned cities, information and experiences of traveling families in additional locations, as well as advice and gear portals. By organizing everything for parents traveling with babies in one place, Bebe Voyage has become a leader in the family travel sector.

“Why do we think families traveling with toddlers will like this new feature?” Juliet Perrachon, Bebe Voyage President and Co-Founder says, “So many of the questions that come up in Club Bebe Voyage revolve around how families can realistically plan a day in a foreign city. Our trails do just that – they give you one day in a city created by a local parent spelling out everything you need to know.”

Crumbdrop CEO Lucie Leblois adds, "Bebe Voyage’s core mission of helping families find adventures they can share with their young children and fierce loyalty of their user base is a perfect complement for the Crumbdrop technology platform. I think we’ve only scratched the surface of what Bebe Voyage can accomplish for their users through this partnership.”