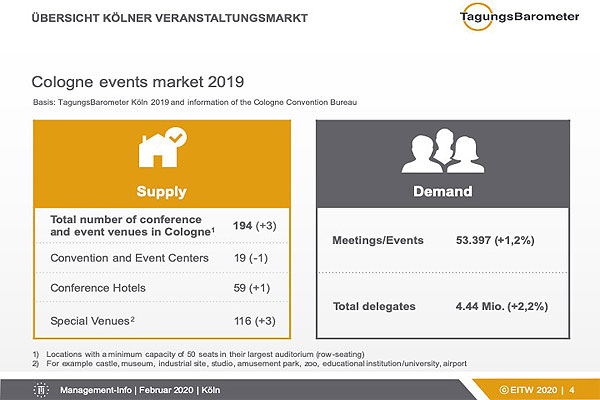 COLOGNE – Cologne’s conference and convention market continues to grow steadily. In 2019 a total of 53,397 events (conferences, conventions and other events) were held in Cologne. This corresponds to an increase of 1.2 per cent. The number of participants rose by 2.2 per cent to a total of 4.44 million. The number of event venues also increased slightly, by three, to 194.

These figures are based on the results of the current TagungsBarometer (Conference Barometer), a survey of convention centres, conference hotels and event venues that is conducted regularly by the Cologne Convention Bureau (CCB) in cooperation with the Europaisches Institut fur TagungsWirtschaft (EITW).

Supply and demand increases in Cologne, more international visitors
The growth in the number of events and participants shows that Cologne continues to be in great demand as a convention destination. According to the survey, the number of organizers has increased from the regions South (+2 percentage points) and West (+4 percentage points) as well as from abroad (+2 percentage points).
Compared to the previous year, there was a change in the most important source markets for the MICE segment in Cologne. The UK and the USA continue to be in first and second place, respectively, and the Netherlands rose to third place, pushing Austria down to fourth.

The sectors of the organizers remain unchanged from the prior year: banking and insurance are still the most important sectors, followed by medical and pharmaceutical companies. Communication companies are in third place.