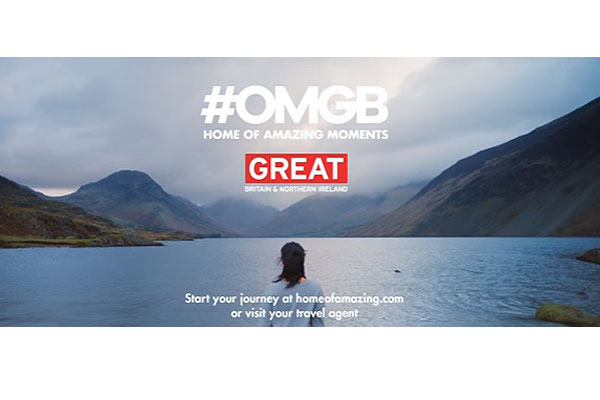 The £2.5 million campaign is expected to generate more than 1.3 million additional overnight stays in 2016 with a £100 million boost to the UK economy.

In the run-up to May half-term and the summer holiday season VisitEngland has launched its largest domestic marketing campaign for 2016 to promote amazing ‘moments’ that can only be experienced on a trip across Great Britain and Northern Ireland.

The four-week #OMGB ‘Home of Amazing Moments’ TV, digital and print campaign, part of the UK Government’s GREAT Britain campaign, uses film and images of authentic experiences and activities shot on locations across the UK to inspire people to take a short-break at home.

The £2.5 million campaign is expected to generate more than 1.3 million additional overnight stays in 2016 with a £100 million boost to the UK economy.

It is the fifth year that VisitEngland has run a campaign to boost domestic tourism and get people out exploring the UK, with former promotions featuring Wallace & Gromit, Shaun the Sheep, as well as celebrities. As in previous years, the campaign is run in partnership with the national tourism organisations of Scotland, Wales and Northern Ireland and tourism businesses across the UK.

VisitEngland/VisitBritain Chief Executive Sally Balcombe said: “From taking a dip in Wastwater Lake in the Lake District to riding the waves at Surf Snowdonia, from watching sunlight breaking over the Scottish Highlands to walking in the footsteps of giants along The Giant’s Causeway in Northern Ireland, the UK is packed full of incredible experiences that you can’t get anywhere else.

“By showing the sheer diversity of activities right here on our doorstep we want to inspire people to book a trip right now to discover their own amazing moments, driving growth in tourism across our nations and regions and spreading its economic benefits across the UK.”

The campaign inspires people to share images of their own amazing holiday moments in the UK using the hashtag #OMGB, some of which will be shared across VisitEngland and VisitBritain’s Twitter, Instagram and Facebook platforms.

Travel partners include Thomas Cook, TUI, The Travel Network Group, Advantage, Barrhead Travel, Premier Travel and tour operators Shearings, Bourne Leisure, Hoseasons, Superbreak, BreakFree Holidays and Attraction World. Partners are using #OMGB imagery and logos in their stores, and in print and digital advertising during the coming months. Travel offers and deals for UK breaks to tie in with the campaign, and competitions, will be available on homeofamazing.com.

Latest figures show that in 2015 there were 124 million overnight trips recorded across Great Britain, an increase of 9% on 2014 with £25 billion spent, up 9% year-on-year.

This year’s ‘Home of Amazing Moments’ domestic campaign is part of a global #OMGB campaign to attract more tourists to the UK.

When the cost of vacations stops many employees from going out-of-town, employers offer voluntary benefits