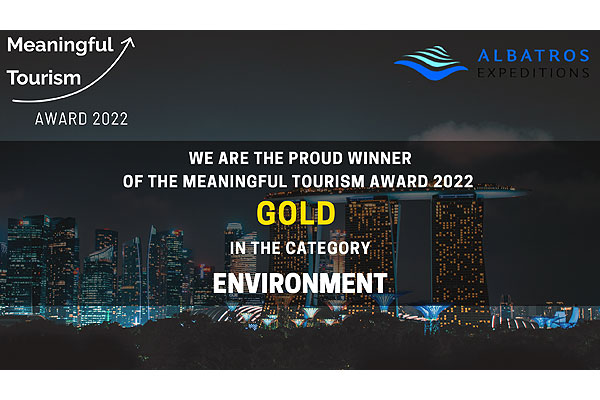 This was the first edition of the Meaningful Tourism Award, which will in the future be organised annually.

The CEO of the Meaningful Tourism Centre, the organiser of the Award, Prof. Dr.  Wolfgang Georg Arlt stated: “We are delighted to see how many stakeholders around the world have started to create new approaches to tourism. Neither to see the customer as king, nor to concentrate on short-term profit and also not treating environmental issues as the only concern will create a positive future for the industry. The task is not to ‘balance’ the different stakeholders’ interests, but aligning them in a way that benefits and satisfies the interests of all stakeholders. The companies and organisations selected can consider themselves as being among the avant-garde of tomorrow’s tourism development.” Rashidah Lim, of Albatros Expeditions was a panellist at ITB Singapore, and received the award for the company.

This was the first edition of the Meaningful Tourism Award, which will in the future be organised annually. CCO of Albatros Expeditions, Greg Carter noted that the award “Highlighted Albatros’ commitment to sustainability in every aspect of our operation, and how proud the team are of the this achievement, as testimony to their dedication over a tough couple of years..”

Albatros Expeditions operates expedition cruises in some of the remotest regions of the planet, in our cutting edge MV Ocean Victory and Ocean Albatros vessels. Both ships produce less carbon emissions than other vessels in their class, and Albatros have a firm commitment to sustainability, and the environment.