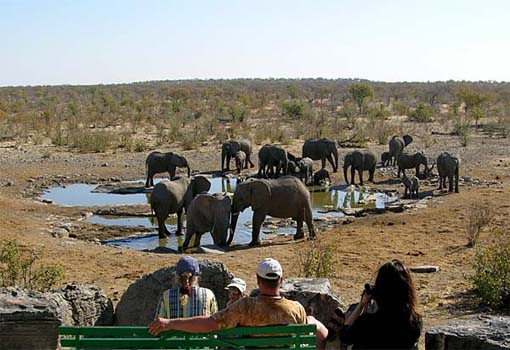 ABIDJAN, COTE D'IVOIRE – The United Nations has declared 2017 as "International Year of Sustainable Tourism for Development", with the official launch by the World Tourism Organization (UNWTO) on January 18 in Madrid.

“Tourism has become a pillar of economies, a passport to prosperity, and a transformative force for improving millions of lives. The world can and must harness the power of tourism as we strive to carry out the 2030 Agenda for Sustainable Development,” said UN Secretary-General, Antonio Guterres.

“In parallel with the growth of the sector, there is also increased responsibility to advance towards greater sustainability, equity, inclusiveness and peace in our societies,” added Rifai.

This will consist of promoting tourism that is respectful of the environment – to preserve countries' resources and natural wealth – and of the people, who stimulate the economy, creating jobs and income and, thus, the development of countries and their populations.

Representing more than 15% of the world population, the continent only currently attracts a small share of the world's tourists. It welcomed 65.3 million tourists in 2014, or 5.8% of worldwide tourist travel. Compared to the 17.4 million international tourist arrivals on the continent in 1990, the performance of the sector has increased nearly fourfold in less than 15 years. In other words, tourism on the continent, especially in the hotel industry, is booming.

In terms of revenue, Africa earned US $43.6 billion in 2014, representing 3.5% of worldwide tourism revenue.

Tourism, engine of growth
Generating income and jobs, tourism can be an engine of growth. In 2014, the sector accounted for 8.7 million jobs in Africa, 500,000 more than in the previous year.

The African Development Bank has, for some years, been publishing an annual report on the sector in English, entitled Africa Tourism Monitor. Jointly produced by the AfDB, New York University Africa House and the Africa Travel Association (ATA), the third and latest edition, published in January 2016, had the theme of "Unlocking Africa's Tourism Potential". The 2016 edition is being finalized. The Bank has also set up a tourism data portal for Africa in collaboration with other partners, similar to the Africa Visa Openness Index, which measures the degree of visa openness on the continent – an important criterion particularly for the mobility of tourists.

Developing infrastructure and regional cooperation
Infrastructure and transport services remain the Achilles' heel of the growth of the tourism sector: "Journeys in the African continent are not always seamless", noted the 2015 edition of Africa Tourism Monitor. It proves more complicated – and more onerous – to travel across the continent than it does to get there from Europe, North America or Asia. Dedicated incentive policies are still to be put in place, beside strengthening regional cooperation.

On the ground, the work of the Bank also supports the interests of dynamic tourism, provider of income and growth. Not only when it funds and builds roads, airports and other infrastructure, but also when the AfDB makes every effort to ensure that neighbouring communities are involved in and associated with projects for them to better take ownership and benefit from them later.

Reconciling tourism and sustainable development
November 2016, at COP22 in Marrakech, saw the birth of an African Charter on Sustainable and Responsible Tourism under the auspices of Morocco and the World Tourism Organization (UNWTO) and signed by 20 countries of the continent.

The objectives of responsible and sustainable tourism are fully aligned with the African Development Bank's High 5s, for development on the continent.

Moreover, three of the Sustainable Development Goals (SDGs) for 2030, adopted in September 2015, target tourism: SDG 8, "Promote sustained, inclusive and sustainable economic growth, full and productive employment and decent work for all", SDG 12, "Ensure sustainable consumption and production patterns" and SDG 14, "Conserve and sustainably use the oceans, seas and marine resources for sustainable development".