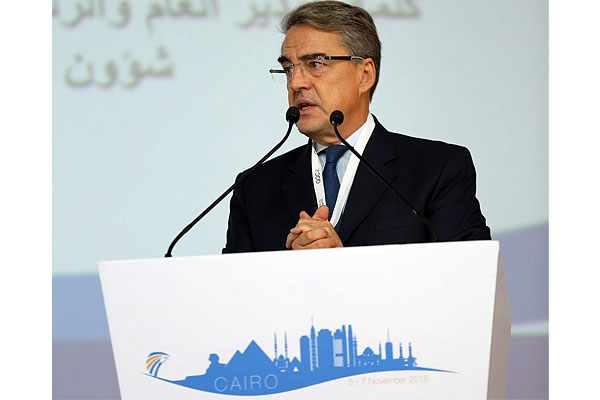 The average delay per flight attributed to ATC issues in the region is 29 minutes. Without urgent progress, that could double by 2025 costing over $7 billion in lost productivity and adding over $9 billion to airline operating costs.

CAIRO – The International Air Transport Association (IATA) urged governments in the Middle East and North Africa (MENA) to maximize the economic and social benefits of aviation.

“Aviation currently supports 2.4 million jobs and $130 billion in economic activity across the MENA region. That represents 3.3% of all employment and 4.4% of all GDP in the region. Over the next 20 years we expect passenger numbers to grow by 4.3% annually. As aviation’s leaders we must work together and with governments to realize this potential-and the economic and social development that it will catalyze,” said Alexandre de Juniac, IATA’s Director General and CEO, speaking at the Arab Air Carriers’ Organization (AACO) AGM in Cairo.

De Juniac highlighted improving aviation infrastructure and enhancing competitiveness while working toward regulatory harmonization across the region as essential.

“As Saudi Arabia and others across the region consider airport privatization our message is clear and simple: talk to all stakeholders -especially the airlines- to ensure that you gain the best long-term economic and social benefits. There is no need for governments in the region to repeat the mistakes that have been made in other parts of the world. Consultation is not just key, it is a must,” said de Juniac.

IATA also expressed concern for air traffic delays in the Gulf. The average delay per flight attributed to ATC issues in the region is 29 minutes. Without urgent progress, that could double by 2025 costing over $7 billion in lost productivity and adding over $9 billion to airline operating costs.

“There is an enormous amount of traffic in a limited geographic area. And the only solution is to manage the area as a whole. Governments must replace political fragmentation with collaborative cross-border decision-making. This has to happen fast or the effectiveness of the region’s hubs will be severely compromised,” said de Juniac.

Competitiveness
The airline industry is hyper-competitive. Rising costs in the MENA region must be brought under control to preserve its competitiveness. “Since 2016 we have seen $1.6 billion added to industry costs in the MENA region. Every dollar in extra charges is a challenge for the region’s airlines that make only $5.89 per passenger. Moreover, it is a dis-incentive for passengers which impacts broadly across the economy,” said de Juniac.

Harmonized Regulation
Global standards are the foundation of the air transport system. The effectiveness of these is displayed in the industry’s safety record. Conversely, the proliferation of consumer protection regimes is having an adverse impact on consumers and airlines. They struggle with confusing, complicated and sometimes competing regulatory regimes.

“Consumers are best served with clear, simple and harmonized protections. In 2015 states worked together to achieve this through ICAO which delivered global guidance in this key area. It is important that the ACAO Consumer Protection Guidelines for Arab States follow this ICAO guidance,” said de Juniac.

Gender Diversity
Supporting the projected growth of aviation will require an expanded labor force. De Juniac called upon governments to tap into the power of women to help alleviate a growing skills shortage in the region.

“We are facing a skills shortage. In the peak northern summer season Emirates had to trim frequencies because it did not have enough pilots. Finding a solution for that will require a comprehensive series of actions over a sustained period. And one of them -which goes beyond the pilot shortage- is to enable more women to find careers in aviation,” said de Juniac.