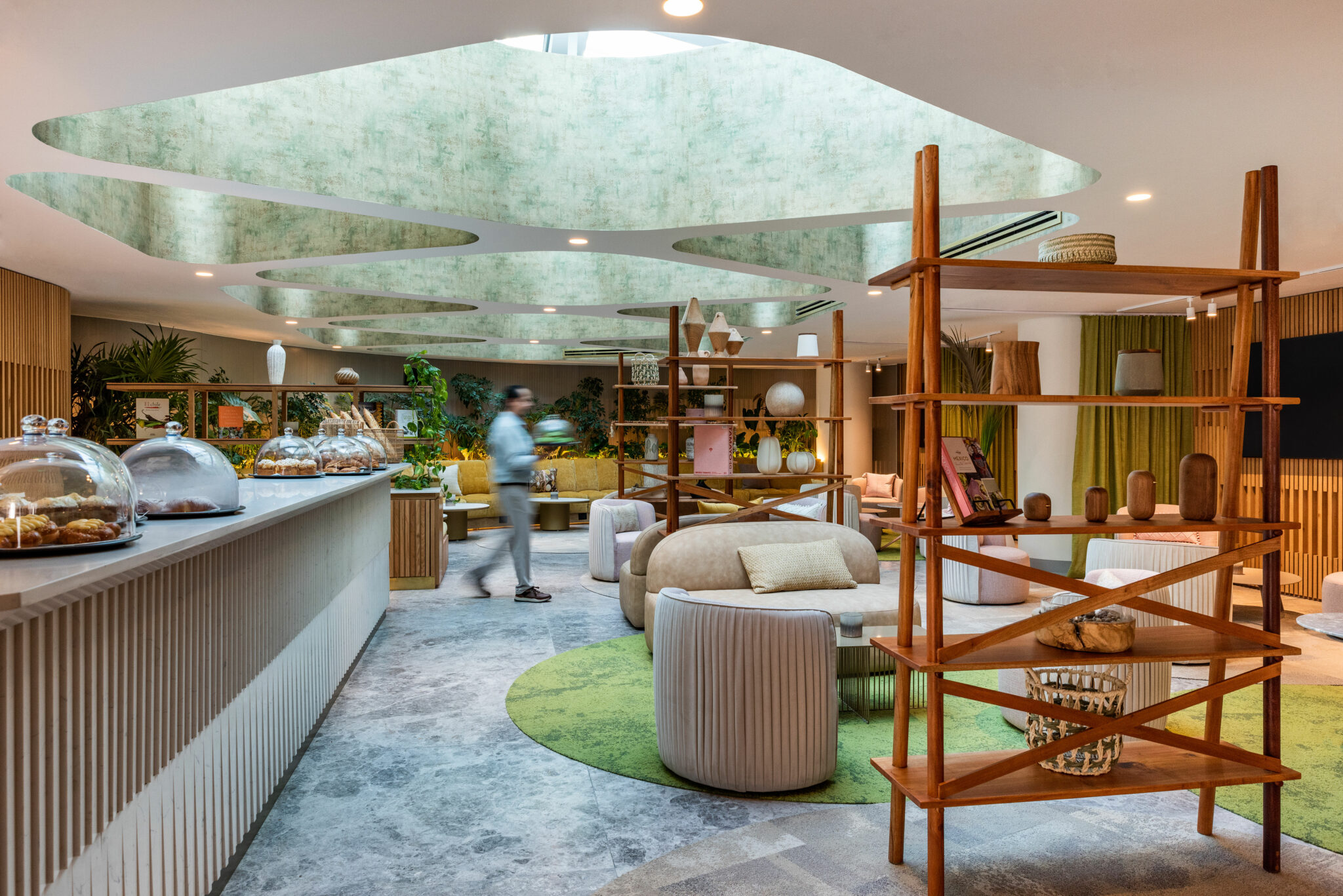 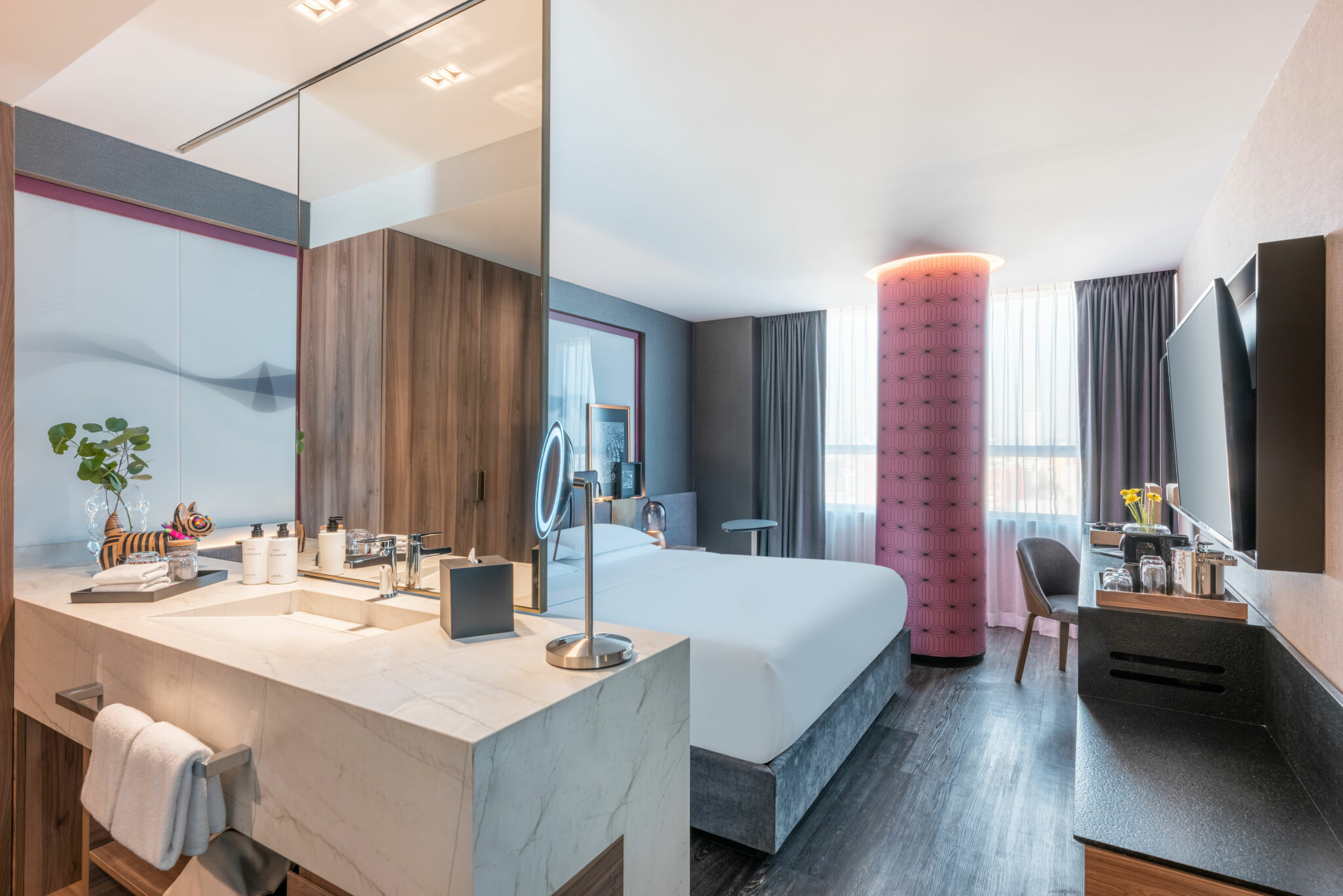 The new hotel makes its mark in Condesa with a Tulum-inspired rooftop restaurant serving up master mixology, a pet-friendly playground, bold design and the tallest outdoor terrace in the neighborhood offering expansive views of the Mexico City skyline.

CHICAGO – Hyatt Hotels Corporation announced the opening of, Andaz Mexico City Condesa, marking the first urban Andaz property in Mexico and the second Andaz-branded hotel in the country following Andaz Mayakoba Riviera Maya. Located in the charming neighborhood of Condesa, an urban community radiating rich history and culture, the new hotel is ideally situated amongst many of the city’s most noteworthy art galleries, boutiques, and restaurants offering guests the very best of its locale. Boasting a unique roster of guest amenities including a beach club-inspired rooftop restaurant with a robust mixology program, a pet-friendly hideaway, an onsite spa, and one of the tallest outdoor terraces in the area, Andaz Mexico City Condesa is poised to become a mainstay of the Condesa neighborhood.

“Condesa is the perfect neighborhood to debut the Andaz brand in Mexico City,” said Analia Capurro, general manager, Andaz Mexico City Condesa. “Expressions of personal style and creative spirit are at the core of the Andaz ethos – characteristics that Condesa also embodies. Every detail of the hotel was thoughtfully curated to add to the vibrancy of the neighborhood and inspire a fresh perspective of Mexico City. We look forward to welcoming guests, World of Hyatt members, customers, and locals into our hotel to authentically experience this dynamic neighborhood full of character and charm.”

The new hotel is housed within the historic ‘i421 Live District’, formerly known as Conjuto Aristos, dating back to 1961. Designed by famed architect José Luis Benlliure Galán who is credited with bringing Art Deco architecture to Mexico City, the building was named a Mexico City Heritage Site and is considered a true masterpiece of Mexican architecture. The building has since been carefully restored and preserved, honoring the geometric beauty and architectural empowerment it holds in the Condesa neighborhood. Andaz Mexico City Condesa is the perfect synergy to bring the historic masterpiece back to life, encapsulating the local culture while offering an unparalleled luxury experience designed to elevate the senses.

The interiors of Andaz Mexico City Condesa are reflective of the global influence and progressive style found throughout Mexico City, and pair a modern edge with Art Deco design. Playful colors in the hotel transform ordinary objects into a sparkplug for imagination and creativity, such as a magenta staircase, hot pink walls and saffron sofas, indicative of the vibrant community in which it resides. Such elements, a nod to Mexican architect Luis Barragán’s signature style, integrate seamlessly into the eclectic essence of the Condesa neighborhood while maintaining a bold but luxurious appeal.

The hotel offers 213 residentially inspired guestrooms, including 20 suites, all of which feature views of either the tree-lined avenues of the Condesa neighborhood, an elaborate internal courtyard or, from higher up, sweeping views of Mexico City. Amenities include designer Byredo toiletries, a workstation and minibar filled with Mexican snacks and drinks from locally owned businesses. Curated artwork found in each guestroom evokes a sense of place, from mosaic-tile headboards that pay homage to the building’s significance to paper mache piñata figurines or “alebrijes” made by local artisans. Each guestroom also features a record player with modern and classic vinyl collections that can be exchanged in the lobby library, a tribute to the neighborhood’s oldest record store, La Roma Records.

In keeping with the area’s reputation as the city’s culinary capital, Andaz Mexico City Condesa’s dining venues complement the area’s thriving gastronomic scene. Cabuya Rooftop restaurant brings a Tulum-inspired beach-club ambiance to the hotel’s 17th floor terrace boasting 360-degree views of the Mexico City skyline and weekend D.J. sets. A seasonal culinary menu highlights coastal Baja and Yucatan-inspired flavors with a selection of sharable seafood dishes including smoked marlin tostadas topped with onions, tomato, cilantro and habanero aioli, and grouper ‘zarandeado’, a 500-year-old fish grilling technique from Mexico’s Pacific Coast, seasoned with peppers, tomatoes and spices. The menu is complimented by a signature cocktail program curated by local master mixologist Moisés Sierra Sáenz and features distinct agave creations such as the Pechuga Tonic, made from mezcal de pechuga, orange and mandarin flavors, tonic, and topped off with sparkling wine. Derba Matcha Café, an inviting all-day café located on the hotel’s first floor is the perfect place to refuel before a day of exploration or in between visits to nearby shops. Rich with aroma and flavor, the menu features artisanal sweet breads, small plates, matchas, lattes, mushroom coffee, cocktails and more.

Inspired by the dog-friendly nature of the Condesa neighborhood, the hotel’s Wooftop Beer Garden and Canine Club is primed to become a popular playground for guests and locals to bring their furry companions. Located on the second-floor terrace, the indoor/outdoor space features a stationary food truck serving drinks and snacks, including a special “dog beer”, a pop-up pet accessory shop from local boutique Perro del Mundo, as well as plenty of space to play and roam. In addition to this pet-friendly hangout, four-legged friends will feel right at home at Andaz Mexico City Condesa with a selection of upscale in-room amenities from cozy dog beds to a menu of pup-friendly treats including vegan poke, salmon, baked biscuits and more.

Guests can also enjoy the hotel’s year-round heated rooftop pool offering phenomenal views of the expansive city below. On the hotel’s second floor, guests and locals will find respite at Pasana Spa & Wellness, a sanctuary of relaxation honoring Mexican ancestral traditions of salt as a source of protection, using local products from Mexico. The spa’s menu features a selection of wellness rituals, face treatments, body scrubs and soothing massages, all of which incorporate ancient customs with contemporary practices. The ‘Protection Ritual’, a signature treatment of the spa, utilizes the thermal effects from volcanic salt to relieve muscular tension, balance the mind and protect the spirit. The facility itself offers four treatment rooms, a relaxation lounge, onsite beauty salon and 24-hour fitness center.

For gatherings of up to 700 people, the hotel is equipped with more than 12,674 square feet of state-of-the-art meeting and event spaces, including a glass ceiling ballroom with customizable color LED lighting technology and an adjoining terrace, an auditorium and three breakout rooms.