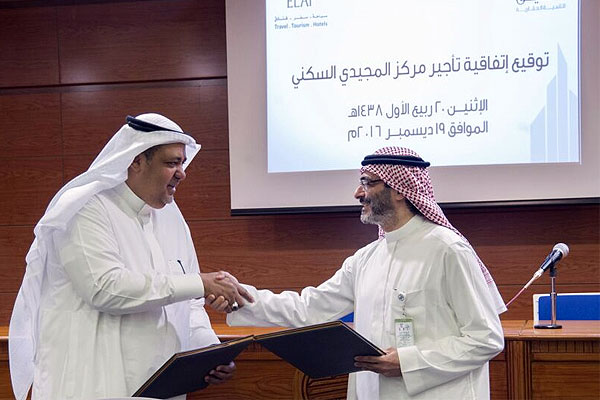 In support of the Saudi government’s efforts to boost the domestic travel and tourism sector in line with the country’s economic diversification scheme, Elaf Group, a SEDCO Holding Group company, has recently entered into a strategic lease partnership agreement with Al Aqeeq Real Estate Development to rent the Al Majeedi Residential Center situated in front of Al-Masjid Al-Nabawi, north of Madinah Al Munawara.

Under terms of the agreement, the Al Majeedi Residential Center will be renamed as Elaf Al Majeedi Hotel—serving as the latest addition to the growing portfolio of Elaf Hotels Company, a subsidiary of the Elaf Group. The new hotel is expected to accommodate the growing number of tourists who visit the KSA for religious purposes such as Hajj and Umrah as well as to see religious sights and its rich cultural traditions.

Bin Mahfouz pointed out that the move complements the Group’s expansion strategies to strengthen its presence in the country by providing the highest quality of hospitality services to the visitors arriving in Al Madinah Al Munawara.

Bin Mahfouz explained that the number of tourists arriving in the KSA is expected to register a continuous upwards momentum in the coming years, complementing the ‘Saudi Vision 2030,’ which was launched by the government of the Custodian of the Two Holy Mosques. “Expansion and development are key priorities of the Elaf Group to achieve excellence by constantly innovating its services and keeping them relevant and up-to-date as per the market requirements. The signing of this new lease agreement with Al Aqeeq Real Estate Development is part of our ongoing efforts to reinforce the Group’s leading position in the hospitality sector across Saudi Arabia and the Middle East,” concluded Bin Mahfouz.