Alpharooms sees substantial influence from reality TV shows on travel bookings | TravelDailyNews International
New Articles
Fairs & Exhibitions
Experience the hotel of the future with Sleep & Eat Virtual
Cruises
New Celestyal Experience ship to debut March 2021
World Tourism Organization
UNWTO launches comprehensive Tourism Recovery Tracker
In Brief
Maslina enhances its guest experience with the addition of a bespoke luxury boat
Hotels & Lodging
RIU provides more than 22,000 hours of COVID-19 prevention training for its staff
Tour Operators
Austin Adventures adds lineup of top Western guest ranch vacations
Statistics & Trends
Survey of travel advisors shows clients are warming up to deals and interest in internatioal travel is stable
CVBs
Meet in Reykjavík, has joined forces with Promote Iceland
In Brief
Ethiopian to resume flight to Victoria Falls
Aviation
Eastern Airways announce new Manchester – Newquay route
Sustainable Tourism
Green destination tells tourists - treat tourism like our living room or don’t come
Hotels & Lodging
TownePlace Suites Columbus North-OSU opens in upper Arlington
Hotels & Lodging
Rentals United announces partnership with Wheelhouse
Featured Articles
What is car camping? And how to do it
Statistics & Trends
Over 1 in 3 people do not plan to gather with family for the holidays due to COVID-19
Other Organizations
Trade unions sound alarm over Ryanair CEO’s bonus pay in the time of mass dismissals, says ETF
Aviation
FABEC ANSPs signed agreement on cross-border Free Route Airspace
In Brief
Corsair returns to La Mayotte
Technology
WishTrip enables all tourism and leisure sites to easily deliver in-app gaming experiences
Aviation
Qatar Airways celebrates the growth of its super Wi-Fi equipped fleet
World Tourism Organization
UNWTO and Google host tourism acceleration program in Sub-Saharan Africa
Headlines:
What is car camping? And how to do it
Five tips for using your mobile phone during a trip
How to survive a bar crawl
Everything you need to know about international driver’s license
Organisations in Leh-Ladakh
Seven effective marketing ideas for your travel agency
Health and safety tips for fall road trippers
Essential tips for beginner mountain bikers
How to stay active when traveling abroad
Why you should consider constructing a floating dock and factors to consider when building
Plan the trip of a lifetime: The eight best RV road trips along the East Coast
How can Malloy Funding help you meet your travel needs?
Melbourne Cup Race 2020 | Latest news, updates & tips
Things you should know before renting an RV
Traveling to Sweden and a bit about Swedish culture
NEWS AROUND THE WORLD

In 2018, Love Island’s season finale drew the biggest viewing figures of all time (3.6 million), alpharooms, too, enjoyed a staggering 73% increased in bookings to Mallorca. This comes as no surprise as according to Google, searches for Mallorca increased by 47% between 2014 and 2018.

The conclusion of the analysis shows holidaymakers from the UK are influenced by pop culture with almost 1 in 5 (17%) of us have booked a holiday to a seaside resort due to watching a reality TV show set at that location.

The six reality TV shows alpharooms has studied are: Benidorm (Benidorm), Love Island (Mallorca), Ibiza Weekenders (Ibiza), The Only Way is Essex - TOWIE (Essex), Ex On The Beach (Crete), and The Only Way is Marbs (Marbella).

Benidorm and Love Island are the two most notable TV shows that brought in the most bookings for alpharooms, compared to the other four in the analysis.

In 2018, Love Island’s season finale drew the biggest viewing figures of all time (3.6 million), alpharooms, too, enjoyed a staggering 73% increased in bookings to Mallorca. This comes as no surprise as according to Google, searches for Mallorca increased by 47% between 2014 and 2018. Love Island first hit our TV screens in 2015.

While In 2010, the year Benidorm’s TV rating took a jump, alpharooms also saw an increase of 86% in bookings. To date, Benidorm as a holiday destination remains alpharooms top five most book locations. 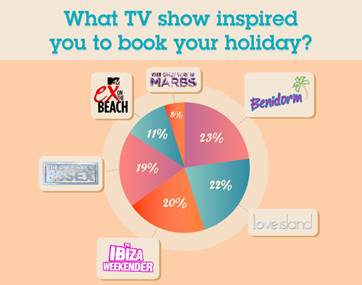 Other significant points of interest including:
- Marbella garnered a 63% increase in Google searches during the launch of The Only Way is Marbs in 2012.
- Ibiza Weekender had helped increase books to Ibiza by 23% in 2017.
- Almost 1 in 5 people (17%) in the UK booked a holiday to a destination they have seen on a TV programme.

Additionally, Brits have also revealed to alpharooms that which of the popular reality shows has the most influence on their travel booking:

Tags:
Alpharooms
About the author