Top 100 City Destinations 2018 by Euromonitor International | TravelDailyNews International
New Articles
Hotels & Lodging
At year-end 2020, Europe’s hotel construction pipeline stands at 1,905 projects/307,093 rooms
Aviation
Radixx and Air Moldova sign multi-year agreement to increase sales and enhance customer experience
Statistics & Trends
Cofton Holidays sees 182% increase in online bookings as Covid-19 roadmap is revealed
Special Interest Travel
Everything the LGBT+ travel market has to offer at ITB Berlin NOW
Statistics & Trends
London's most scenic view revealed, based on TripAdvisor reviews
Special Interest Travel
Generali Global Assistance to offer travel insurance for campers through RoverPass
Aviation
Alternative Airlines adapts to COVID-19 challenges and posts revenue of £9.4m in 2020
Special Interest Travel
IGLTA becomes a Partner of Copenhagen 2021 to support WorldPride and EuroGames
In Brief
Blair Estate awarded Green Tourism Silver status
Aviation
As EU air passenger traffic continues to tumble, the impact of blanket travel restrictions is laid bare
MICE Industry
Meeting and event planners have no reservations about new virtual tour service
Hotels & Lodging
LoungeUp launches a mobile key to allow guests to open their hotel room with their smartphone
Statistics & Trends
The 'Fusion Trip' trend: City and nature getaways
Cruises
Holland America Line extends cruise pause to include all departures sailing to or from a Canadian port in 2021
Hotels & Lodging
Five new design-led homes join Greece’s White Key Villas
Hotels & Lodging
Electra America and AKA team up to launch $500m. opportunities hotel investerment fund
Aviation
Embraer’s Phenom 300 becomes world’s best-selling light jet and most delivered Twinjet in 2020
New Appointments
Benchmark announces the appointment of Chris Steffich as General Manager for the David Rubenstein Forum at the University of Chicago
Featured Articles
How to plan a dream vacation to the Great Smoky Mountains?
Hotels & Lodging
Hotelbeds signs preferred partnership with House of Travel to increase distribution reach in the Pacific
Statistics & Trends
188 million Americans open to COVID-19 vaccine passport if required for travel despite privacy concerns
Featured Articles
How the pandemic changed travel
Technology
GlobalStar Travel Management and OneWurld, announce strategic global partnership
Headlines:
How to plan a dream vacation to the Great Smoky Mountains?
How the pandemic changed travel
Why visiting a new country is a great idea
Got injured during an overseas trip? Here's what you should do right away
Excellent tips for people who want to sleep soundly while traveling
Kailash Manasarovar Yatra - The inside story
Six ways to boost your summer holiday fun trip this year
How to prepare for your ultimate casino experience in Sweden
Want to explore Alaska? Here's how to make it happen
Timeshares: What is it and how it works
Things you should bring on every hiking tour
Nine best places in Australia for making memories
Three destinations to visit in a late era of Covid
Few incredible worldwide zip line experiences
Where can I surf in Kona?
NEWS AROUND THE WORLD

The ranking shows that six out of the top 10 most visited cities in 2018 are in Asia, with Hong Kong and Bangkok as the top two performers with Singapore, Macau, Kuala Lumpur and Shenzhen in the global top 10.

Top 10 Cities in Europe by International Arrivals in 2017 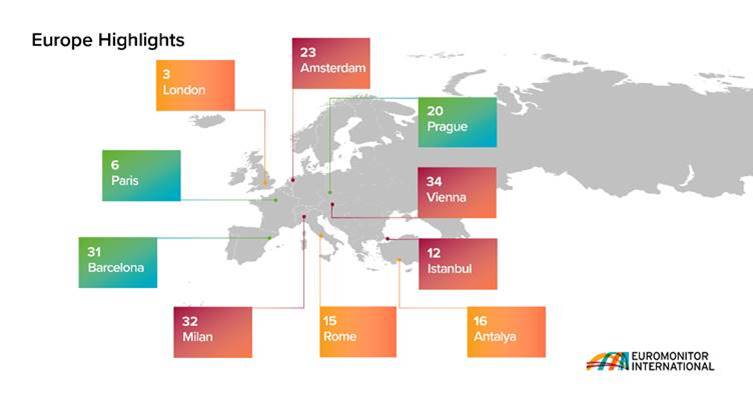 Portugal heading up
After winning Europe’s Leading Destination 2018 at the World Travel Awards, Portugal is again on the spotlight. With international arrivals reaching 2,2 million trips in 2017, Porto is featured for the first time in the top 100 ranking.

The city rose 42 places in the ranking between 2012 and 2017, becoming the 96th most visited city in the world. The city should continue this upward path as international inbound arrivals expected to register healthy growth of 7% in 2018.

Portugal’s capital, Lisbon, was also featured the 100 cities ranking at the 62nd position in 2017.

Antalya made the top 10 Europe’s ranking in 2017. The city will gain two positions in 2018 to become 14th most visited city globally, with international arrivals reaching 10,7 million trip this year.

Focus in Paris
After losing two positions in 2016 due to a series of terrorist attacks, Paris’ international arrivals reached 16,8 million trips in 2017, moving the city up one position to become the 6th most visited city globally. Nice, on the other hand, is expected to lose seven positions in 2018 compared to last year.

Ukraine debut
Lviv is the only Ukranian city in the top 100 city destinations ranking (82). Due to geopolitical instability, Lviv have dropped out of the ranking but the increase in international arrivals have helped the cities to recover. The city is expected to post 2,7 million international arrival trips in 2018.

While Asian cities are the clear winners, cities in the Middle East and Africa region, such as Jerba, Sousse and Sharm el Sheikh have dropped out of the ranking in the past few years, mainly due to terrorist attacks and subsequent slumping demand. In contrast, strong growth was registered by Turkish cities, as the country rebounded from a turbulent 2016.

This year’s report also highlights three cities that joined the ranking for the first time:

Batam
Batam, in Indonesia, rose 31 positions since 2012 and strengths the group of Asian cities among the most visited cities in the world. The upward trend should continue, and the city is forecasted to see a 12 percent increase in inbound arrivals in 2018.

Santiago
Chile features the ranking for the first time as its capital presented a healthy 18 percent growth in inbound arrivals last year, rising 17 positions in the ranking since 2012 to become the 93rd most visited city globally.

Porto
After winning Europe’s Leading Destination 2018 at the World Travel Awards, Portugal is again on the spotlight as Porto make the top 100 ranking for the first time, rising 42 positions in the ranking since 2012.

Euromonitor International Travel Research Consultant, Wouter Geerts comments, “Over the past years, Ukraine tourism has struggled amongst a tense geopolitical situation. However, Lviv is turning things around and is coming up as an affordable and attractive city to visit. The city is especially popular amongst Polish and German travellers. In October, Ryanair announced the launch of five new routes between Lviv and Krakow, Dusseldorf, London, Warsaw and Memmingen, delivering 14 weekly flights with a total capacity of around 250,000 travellers per year. AirBaltic is also adding a flight between Riga and Lviv to its schedule, starting from April 2019. Recent up flaring unrest between Russia and Ukraine could, however, have a negative impact on the future potential of the city and Ukrainian tourism in general.”

Euromonitor International Travel Research Consultant, Wouter Geerts comments, “All cities in Germany are showing positive growth, so dropping in the ranking highlights how other cities are growing faster rather than bad performance by cities like Berlin, Munich and Frankfurt. Berlin is a highly mature city, and there are concerns as a result of overtourism and the growth of companies like Airbnb in the city. Therefore, it is expected that arrivals only grow slowly.”

“In general, the strongest growth worldwide comes from the strong growth in outbound travellers from China. This means that especially upcoming cities in Asia are showing strong growth, while mature cities in Europe (which have not been impacted by terrorist attacks in past years) show more slow and steady growth”, he concludes.

Italy in decline
Italy has four cities featured in the top 100 ranking:

Wouter Geerts comments, “Italy is a very mature destination. Thanks to very famous cities like Rome, Milan, Venice and Florence, numerous UNESCO sites, and famous food and wine, the country always tends to perform strongly. The peak season in Italy often sees overcrowding especially in cities like Venice and Rome, which represents a major downside for tourists and locals alike. This will remain a threat for the coming years, with Venice one of the most high-profile cases of cities struggling to attain sustainable tourism growth.”

Changes in Greece
Rhodes, in Greece, was the 99th most visited city globally in 2017. However, the city will leave the top 100 cities ranking in 2018 when to become the 102nd most visited city. Athens and Heraklion remain in the ranking at the 49th and 68th position, respectively.

Wouter Geerts comments, “Rhodes is performing strongly, so it is slightly misleading to look at it as dropping out of the top 100. Growth is expected to be around 5% in 2018, but there are other cities which are performing stronger. Greece has had economic issues over the past years, which dampened arrivals, but the country has benefited from relative calm in the country, and unrest in neighbouring countries like Turkey.”