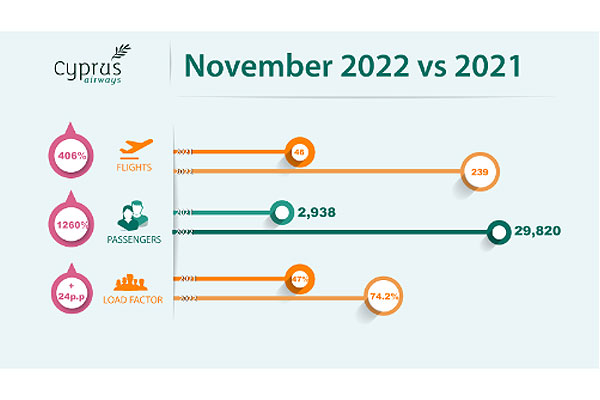 “I am happy to note that Cyprus Airways is continuing with its positive trend and results even in Winter. These figures are remarkable, even when compared with those registered in November 2019, before the start of the pandemic. Last month (Nov ‘22) we carried 1260% more traffic and operated 406% more flights than in November ’19,” said Natalya Milovanova, Chief Financial Officer of the airline.

In December Cyprus Airways is continuously seeing a strong demand for seats. To service this requirement, it made plans to increase seat capacity between 15 December and 15 January 2023 on Athens, Yerevan, and its newly launched route of Paris, to facilitate incoming tourists and Cypriots visiting Cyprus over the Christmas Period.

To continue boosting demand targeting specifically Christmas shopping enthusiasts, the airline has issued special offers on day trips to Athens, and other offers on its recently launched routes of Paris and Rome.

“We are continuing with our steadfast commitment to boost tourism demand and facilitate travel to and from the Island. As the sole Cypriot flag Carrier, we are working for the benefit of the Cypriot economy and its tourism industry, all year round,” added Mrs Milovanova.

Countries where Romanians most often migrate