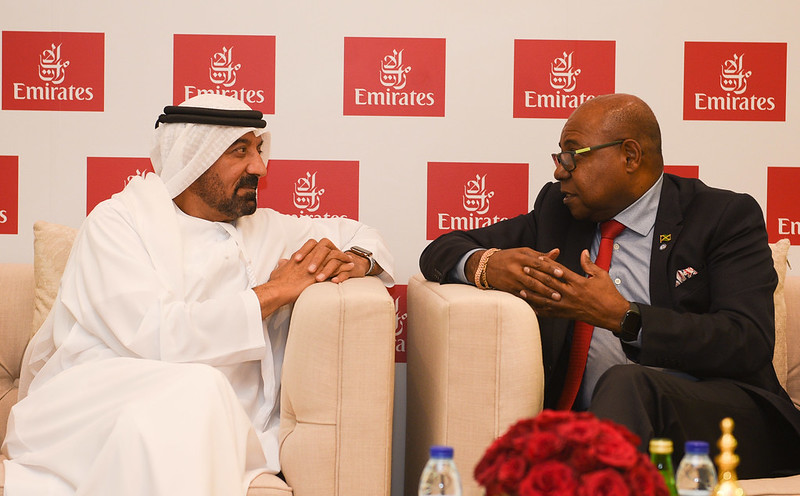 DUBAI, UAE – In a historic first for Jamaica and the Caribbean, Emirates Airlines is now selling seats to Jamaica. This arrangement opens gateways from the Middle East, Asia and Africa to Jamaica and the rest of the region.

This groundbreaking agreement is a major outcome of Jamaica’s debut participation in the Arabian Travel Market, which runs from May 9-12, 2022.

According to Minister Bartlett: “This is a major initiative for Jamaica as it is opening the Middle Eastern gateway from Asia and North Africa. It is the first time that Destination Jamaica has been entered into the ticketing system of a GCC airline and gives the Jamaica Tourist Board (JTB) significant leverage to negotiate direct flights to the destination.” Discussions began in October 2021 when Minister Bartlett and Director of Tourism, Donovan White made their first visit to Expo 2020 Dubai."

Both Norman Manley and Sangster International Airports are now listed in the airline system, with ticket pricing available accordingly. Flights are offered with options including JFK, New York, Newark, Boston and Orlando. One option goes through Malpensa, Italy, allowing access to the European market as well.  Importantly, the flights are being sold by Emirates Holidays.

Minister Bartlett’s trip to Dubai is part of a mega marketing tour to further boost growth in the island’s tourism industry, which includes stops in New York, Africa, Canada, Europe and Latin America, with breaks in between.