Keen interest in new ITB Berlin 2023: Over 70 per cent of display area already booked up 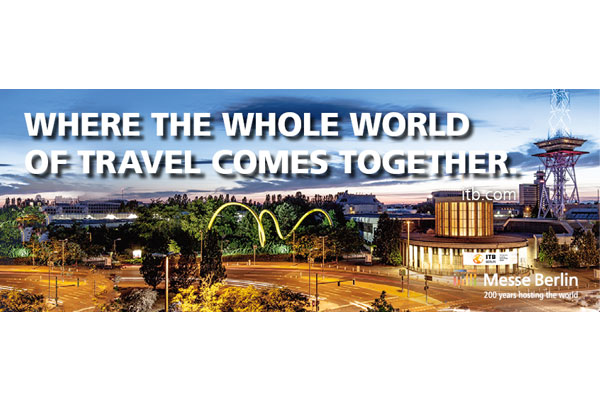 Once again, Berlin welcomes the world of international tourism. Taking as its slogan ’OPEN FOR CHANGE’, ITB Berlin is ready to host a live comeback next year. From Tuesday, 7 to Thursday, 9 March 2023, after three years of pandemic-related trade fair restrictions the World’s Leading Travel Trade Show is opening its doors to the travel community with a new concept and live on the exhibition grounds. In future, the trade show will be focusing on its strengths and placing the emphasis on trade visitors and the media. The Berlin Travel Festival, until now the consumer partner event of ITB, will become part of the leisure exhibition BOAT & FUN Berlin in November of this year. The new concept has already been well received. Five months before the show is due to begin ITB’s organisers are reporting high booking levels, with over 70 per cent of the display area already occupied. In particular, the Early Bird offer on stand bookings is popular with customers.

High number of bookings from Arab countries, Europe and Asia
Numerous organisations and companies are back in customary force for the largest gathering of the international travel industry. Thus, over the course of the show trade visitors will be able to find out about the wide range of products from destinations in Arab countries and Europe. In particular Turkey, Morocco and the host country Georgia are represented on larger stands. As in previous years, the Arab countries in North Africa and the Middle East are showing keen interest in ITB Berlin, with Egypt, Qatar, Oman, the United Arab Emirates (UAE) or Saudi Arabia, who occupy an entire hall.

European destinations are attracting even more attention than usual with a large number of display areas. Popular European holiday destinations and regions including Greece, Spain, Bulgaria, Croatia, Malta, Montenegro and Azerbaijan are showing what they have in store for next year. Germany is heavily featured. All 16 federal States are either represented with their own stand or as exhibitors with the German National Tourist Board (Deutsche Zentrale für Tourismus).

ITB Berlin is also registering high demand from Asia, especially from southeastern and northern regions. The Maldives in particular are strongly represented. Singapore, Thailand, Malaysia, South Korea, the Philippines and Japan are back in large numbers again. Hotel chains including Dusit and Centara, which are mainly present in Asia, are also taking part in order to exhibit their show highlights to international trade visitors at ITB Berlin. India is back too, and visitors to ITB Berlin can also look forward to news from Australia next year.

On the other side of the Atlantic, in North and Central America, the USA as well as numerous Caribbean islands including Aruba, the Bahamas, Barbados, the Dominican Republic, Jamaica and Cuba have decided to take part in ITB Berlin.

From equatorial to southern Africa, Mauritius and the Seychelles are among those returning in usual numbers to ITB Berlin. NTOs, including from Botswana, Namibia, Kenya, Tanzania, Uganda, Malawi, Eswatini, Zanzibar and Ghana, are also strongly represented again, as are the African Travel & Tourism Association (ATTA), Southern Africa on Show and numerous private operators, hotels and tour operators.

Tourism segments are expanding too: Travel Technology and cruises
In the trending tourism segments Travel Technology, Adventure, Responsible Tourism, LGBTQI+, Medical Tourism, Luxury Tourism, Technology and Tours & Activities (TTA), ITB Berlin is also delighted that exhibitors are back. In particular the Travel Tech segment is strongly represented again, due to new hotel software solutions and payment services. In the eTravel segment, ITB Berlin 2023 is again demonstrating its leadership in trends and innovations by highlighting best practices and case studies on trending topics such as AI and robotics, VR, deep data, online and cybersecurity. There is already high demand from cruise tour operators, while airlines, among them Lufthansa, are also reporting high stand booking levels. First-time exhibitors at ITB such as the restaurant and hotel brand Hard Rock International are among those demonstrating that trade fair business is returning to life after the pandemic.

“We are delighted the industry and our customers are showing such keen interest in ITB Berlin 2023. In the same way that the world has changed these last few years, we too must be open to change and adapt", said David Ruetz, head of ITB Berlin. “We see that consumer behaviour and markets have changed here and there. As the World’s Largest Travel Trade Show, ITB cannot ignore these developments in order for the format to stay relevant in the future. As a force that shapes and influences an entire industry we are taking these new developments into account and have decided to clearly focus on B2B customers, in order to retain their loyalty and secure new ones.“

ITB Berlin Convention 2023
Parallel with ITB Berlin 2023, the internationally renowned ITB Berlin Convention is taking place again on the Berlin Exhibition Grounds, in Halls 7.1a and 7.1b as well as on the convention stages in Halls 6.1. and 3.1. Individual sessions will be streamed on the ITBxplore platform. In its role as a thinktank, the leading international travel industry convention features keynote speeches, panel discussions, award presentations and interviews with experts on forward-looking themes. Topic headings include Travel Technology, Marketing & Distribution, Future Travel, MICE, Sustainability and Social Responsibility.

Taking place on 6 March at the Palais am Funkturm, ITB Media Monday is a new hybrid event. Following the official opening press conference at 10 a.m., exhibitors can relay their message to the world a day before ITB Berlin opens and book the Palais exclusively for hybrid presentations and press conferences. The call for papers inviting submissions for one of the coveted slots opens in November.

New Lounge concept: meeting tables on the exhibition grounds can be booked online
Together with the new Business+ Lounge in Hall 7.2A and Business Satellites, at hub27 for example, the launch is taking place of a new Lounge concept. This gives ITB visitors an opportunity to meet and talk or process emails in a relaxed atmosphere, especially on days when the show becomes hectic. Each table seats four people. Customers can reserve meeting tables in the new online shop both for themselves and their counterparts for an hourly fee of 58 euros. Co-working space is also available in the Business+ Lounge, which offers a peaceful atmosphere for preparing or following up appointments, or charging mobile devices. The co-working area is reserved exclusively for customers with meeting table tickets. Reserving slots via the online shop at itb.com is scheduled to open in December 2022. During ITB Berlin, QR codes can be found at both locations. These can be used to reserve a table at short notice. The meeting tables are available during the show, daily from 10 a.m. to 6 p.m. Depending on demand, further locations may be available via the online shop.

Get in touch online and meet in person with ITBxplore
Virtual, effective, but still personal – that is the way networking functions at ITB Berlin 2023. Exhibitors can use their ITB Berlin ticket for exclusive access to ITBxplore, the new online platform. Visitors can browse the exhibitor directory, plan their ITB Berlin Convention programme, make appointments at the event with industry buyers and sellers – all before they arrive at the grounds. The platform’s online services are available for preparing and following up after the event until 2024. Participants can also download the ITB Berlin app and update their profile as of January 2023.

Latest ITB Podcast series addresses skills shortage
“Working where others go on holiday" was an idea that for many years worked well for the tourism industry and attracted potential employees. So what has changed? ITB looks at this topic in depth and will shortly launch a new four-part series about a pressing issue that is impacting not only the tourism industry: the skills shortage. Kicking off the series, which is presented by elevtr co-founder Laura Schmidt, are two twenty year-olds, who as prospective employees also talk about their “new work” demands.

hub27 – modern event building offers greater flexibility
With the opening in early summer of hub27, both Messe Berlin and ITB Berlin were looking ahead to the future. The availability of the new event venue, with direct access to Halls 1 and 25, enables refurbishment of successive exhibition halls. The majority of exhibitors which this affects in the inner circle around the Radio Tower are able to relocate to hub27. hub27 is an ultra-modern multi-purpose event venue. The hall is a pillar-free structure covering 10,000 square metres featuring its own foyer measuring 550 square metres. It connects directly to Halls 1 and 25, providing optimum access to the entire exhibition grounds. As well as hosting Germany as an exhibitor, hub27 will also be the first-time venue for numerous airlines and visitors to the ITB Blogger Base and Business Lounge at the upcoming ITB Berlin.

ITB Berlin 2023: Technology, Tours & Activities segment is again the international platform for one of the fastest-growing markets