Europe’s airlines face yet another squeeze on profits as Russia’s invasion of Ukraine leads to higher jet-fuel prices and disruption of flight paths just as passenger traffic was set to rebound with the ending of pandemic-related travel restrictions.

First, there are those sharply higher fuel prices, back at levels not seen since 2014, particularly for those airlines without significant hedging in place. Worries about the future supply of Russian crude have pushed oil prices back toward USD 100 a barrel in response to Russia’s invasion of Ukraine which has triggered wide-ranging international sanctions against President Vladimir Putin and his government. 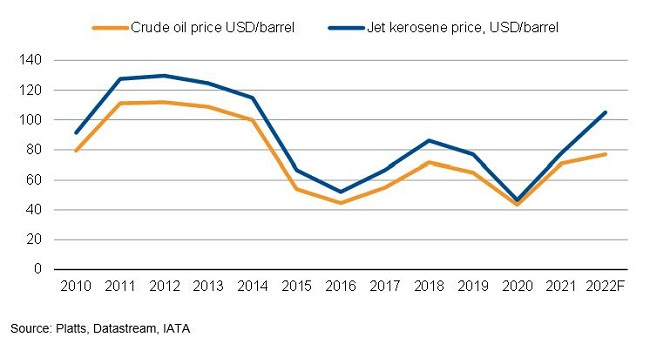 Normally fuel is the first or second biggest cost item so jet fuel prices have long driven airline profitability, representing between 15% and as much as 35% of airline operating costs in the past decade. 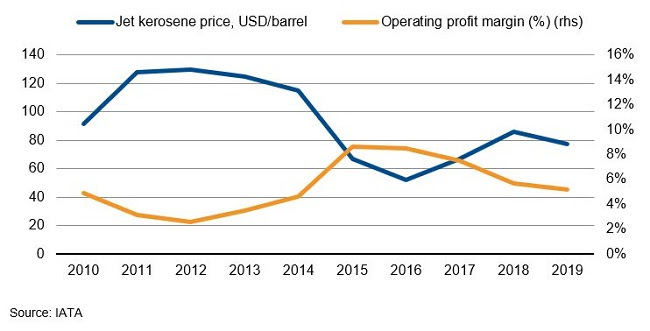 Carriers have over the years actively hedged their fuel bills by purchasing a certain amount of kerosene at predetermined prices using swaps, futures and call options with a one- to two-year horizon. The experience of the pandemic when airlines had to ground fleets and fuel prices proved highly volatile, leaving airlines locked into buying fuel they didn’t need at above-market prices, has led some carriers to adjust their strategies, with more quarterly than annual hedging and greater use of options.

Latest data show that, for Europe’s carriers which disclose hedging, they have significant proportions of fuel costs hedged near-term but much less for later this year and 2023 for some. Some abandoned hedging such as Wizz Air or Norwegian, leaving them potentially exposed to much higher fuel costs if oil prices don’t fall back soon.

Secondly, no-fly zones represent potentially significant extra disruption beyond the skirting of Ukraine’s skies already forced upon European carriers for safety reasons as Russia prepared and launched its attack on the country. In Europe, the EU, UK and Scandinavian countries have banned Russian flights from their skies. Russia has threatened to retaliate which could create significant problems for carriers reliant on serving Russian airports and using Russian air space such as Finland’s Finnair. Airlines forced to choose longer routes to avoid flying over the huge Russian land mass would also push up fuel consumption.

Europe’s airlines face other headwinds in the winding down of various forms of government support on which they relied heavily to get through the Covid-19 shock just as inflation – over and above fuel prices – is picking up in many European countries, particularly in the shape of higher airport charges.

However, the simplest option of passing on costs to passengers through higher ticket prices looks the most difficult without sacrificing market share. Europe’s air travel market suffers from lingering over capacity amid the prospects of a weaker-than-expected economic recovery due to the spread of the Omicron coronavirus variant in the past few months and now the outbreak of war in Ukraine.