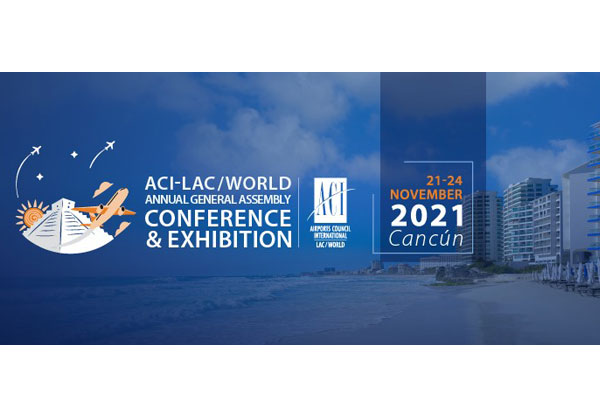 CANCUN – The 2021 Airports Council International (ACI) World/Latin America and the Caribbean (LAC) Annual General Assembly, Conference, and Exhibition, under the theme “Reconnecting Aviation for a Sustainable Future” has officially begun in Cancun, Mexico.

More than 300 aviation leaders from around world were welcomed by the Subsecretary of Transport of Mexico Carlos Alfonso Morán Moguel; Secretary General of ICAO Juan Carlos Salazar Gómez; ACI World Chair, CEO of Corporación América Airports, and President of Aeropuertos Argentina 2000, Martin Eurnekian; and ACI LAC Chair and CEO of Reach Airports Andrew O’Brien. It is one of the first global in-person aviation events since the pandemic began.

“During the past 20 months, ACI has worked tirelessly to be the voice of the world’s airports, representing our members’ interests both on the global stage and on the ground through our products and services during the entire crisis,” said ACI World Chair, CEO of Corporación América Airports, and President of Aeropuertos Argentina 2000, Martin Eurnekian. “And while airports continue to feel the repercussions of the pandemic, we have begun to rebuild—albeit it in a very different world, underlining the importance of events such as this one.

“More than ever, we need to work together. Claims that are out of context regarding airport charges go against our efforts to build back better. The industry is an ecosystem that includes much more than airlines and airports. This should not be a zero-sum game. Airports are businesses in their own right, with many of them having a commercial focus that extend benefits to traveling public and the communities they serve.”

Giving a State of the Industry address, ACI World Director General Luis Felipe de Oliveira delved into the symbolic importance of gathering in-person, the latest data concerning the impacts of COVID-19 on airports, and the socio-economic importance of a sustained recovery.

“The fact that aviation stakeholders are gathered under one roof here in Cancun to exchange information on the most pressing issues of sustainable recovery is proof of the sector’s upward trajectory,” said de Oliveira. “Our story of recovery will not only benefit air travellers and the airport business. As long as there is a need for the movement of people, culture, and goods, airports will remain economic engines of growth for the communities they serve, providing critical social and economic impacts well beyond the runway.”

Key to a sustainable future is to ensure the efficient use of airport infrastructure as the industry recovers and grows. The enormous revenue losses caused by the pandemic have imposed an additional obstacle to the pre-COVID-19 capacity challenge, wherein the future of air transport demand threatens to outstrip current and planned airport infrastructure.

Previous ACI research estimated that total global airport capital expenditure (CAPEX) required by 2040 was US$2.4 trillion globally. As such, airports need to be able to set airport charges with a commercial focus to attract the level of investment needed and to signal whether users are willing to pay for these investments.

“Where there is excess demand for airport capacity and expansion is difficult, airport charges should play a critical role in signaling which airline operations would make the best use of the scarce capacity,” said de Oliveira. “Charges should signal the scarcity and whether the market is willing to pay for capacity expansion. Where there is a willingness, scarcity-based charges can be used to prefund much needed CAPEX.

“On the other hand, where airport capacity is underutilized, there is a role for airport charges to provide incentives for new services to increase regional connectivity and hence maximize the economic and social benefits of air transport.”

In supporting a more efficient aviation ecosystem, ACI World has released a new Policy Brief on the critical need to modernize global policy frameworks on airport charges. The Policy Brief considers the significantly altered competitive landscape that both the airport and airline industries have experienced over the last decades and following the pandemic. It recommends that:

“At the end of the day, airport charges policies should be crafted for the benefit of the travelling public,” said ACI World Director General Luis Felipe de Oliveira. “Regulators must consider what is ultimately best for consumers. In many instances this means ensuring that existing infrastructure is used as efficiently as possible, incentivizing the sustainable development of airport infrastructure, and enhancing connectivity to generate socio-economic benefits. All the above require clear market signals for the efficient allocation of resources.”