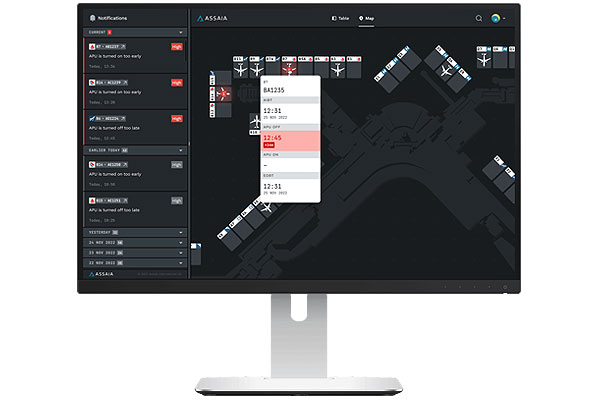 A recent report commissioned by the Airport Operators Association showed that the largest part of an airport’s emissions come from aircraft on the ground, with APUs being a major contributor. However, there is currently no systematic real-time visibility of APU usage.

Max Diez, CEO of Assaia said, “Many airports provide fixed or mobile ground power options, as well as pre-conditioned air. There is often no need to use APUs at the stand. However, we know they continue to be used, needlessly pumping polluting emissions into the atmosphere and racking up fuel bills. One of our customers, for example, learned that a carrier was not shutting down their APUs at all while the aircraft were on the ground. This is very avoidable.”

APU Emissions Control involves the installation of sensors at the stand, which monitor whether the APU is in use or not. That data is fed into Assaia’s artificial intelligence software, which compares it against flight information to establish if the APU usage meets or violates regulations.

The resulting information is then displayed on a desktop app and automated text messages are sent to the appropriate people, delivering immediate alerts about violations of APU usage regulations.

Assaia has already monitored over 1.5 million turnarounds at airports in North America and Europe. The software has been shown to reduce the need for APU usage by at least nine minutes per turnaround, equating to a reduction in CO2 emissions of over 13 million kilogrammes of CO2 per year for a large airport.

Max Diez said, “Every metric shows that using FEGP, GPUs and PCAs is much better for the environment and reduces operating costs. It’s obvious the current situation has to change. And the only way to make that happen is by providing clear visibility about what is actually happening at each stand. After all, you can’t manage what you can’t measure.”

APU Emissions Control is a standalone product which can be installed in a matter of days. It can also be deployed as part of Assaia’s ApronAI solutions which monitor all activity on the apron.