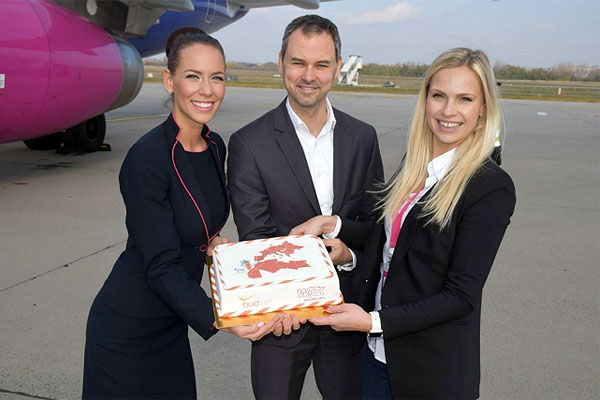 FRANKFURT – Wizz Air announced that it will start operating low-fare flights from Frankfurt Airport launching two new routes to Sofia and Budapest, the capitals of Bulgaria and Hungary. The newest WIZZ services will commence on 22 May and 15 December, respectively and will be operated daily.

The newest routes from Frankfurt Airport will be operated with brand new, state-of-the-art Airbus A321 aircraft. With 230 seats on board, the Airbus A321ceo is the most efficient single-aisle passenger aircraft. The aircraft’s superior operating economics mean that WIZZ offers more seats to more destinations at WIZZ’s lowest fares at the same time as delivering the lowest emissions and noise footprint in its class. In addition to the refreshed livery now appearing more frequently in the fleet, the A321ceos feature new interior colors, a lighter cabin ambiance, soft leather seats, and more cabin seating choices.

George Michalopoulos, Chief Commercial Officer of Wizz Air, said: “We are thrilled to announce the addition of Frankfurt Airport to our ever-growing low-fare network, which now consists of 137 destinations across Europe and beyond. Our newest services connect Frankfurt with two Central and Eastern European capitals, Sofia and Budapest that both have a lot to offer to their visitors. Operating daily with competitive low fares, we are sure that our new Frankfurt routes will be popular among both business and leisure travelers. Our friendly crew looks forward to welcoming all Frankfurt passengers with a smile on board one of our brand new, state-of-the-art Airbus A321 aircraft.”

Winfried Hartmann, Fraport AG’s Senior Vice President of Sales and Customer Service, said: “We are very happy to welcome Wizz Air, Central and Eastern Europe’s largest low-cost airline, here at Frankfurt Airport with flights beginning in May 2017. The daily connection to the Bulgarian capital Sofia offers another excellent addition to the route network at Frankfurt Airport. The decision by Wizz Air also underscores the growing importance of Frankfurt for the low-cost market. We wish Wizz Air many happy landings at FRA!”

Starting its fifth German connection, Wizz Air’s new operation will give the ULCC a 15% share of all of Budapest’s scheduled seats to the German market. Adding another 1,260 weekly seats from the capital city airport further establishes Germany as the largest country served from Budapest. With the addition of Wizz Air’s Frankfurt link, the Central Eastern European airport will now offer more than 160 weekly services to 13 of Germany’s airports.

Commenting on the announcement, Balazs Bogats, Head of Airline Development at Budapest Airport said: “It’s great news that Wizz Air will once again be enhancing our route network adding its 61st destination from Budapest this winter. Our largest carrier’s low-cost service will complement our existing Lufthansa service to Frankfurt and, as an extremely popular route, we more than welcome Wizz Air’s new link which will help us meet the demands of all our customers.”

* ACI suggests creation of 750 on-site jobs for every 1 million carried passengers per year.