Greek meetings alliance: a groundbreaking partnership that will grow the Greek MICE industry 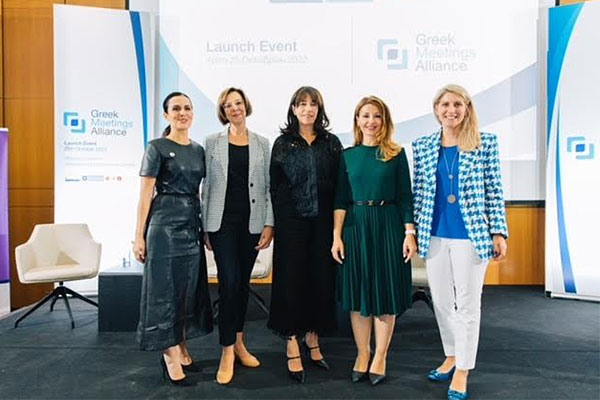 Three major stakeholders from the Greek MICE industry have joined forces to promote Greece as a destination for high-quality conferences and events. The Alliance is designed to boost the economic impact of the meetings industry by connecting the regions of Greece, creating jobs and promoting investment.

The new Greek Meetings Alliance will expand and amplify the long-standing informal collaboration between the largest organizations in the meetings and events sector: the Hellenic Association of Professional Conference Organizers & Destination Event Specialists (HAPCO & DES), the City of Athens/This is Athens Convention & Visitors Bureau, and the Thessaloniki Convention Bureau (TCB).

A memorandum establishing the Greek Meetings Alliance was signed during a celebration at the Megaron Athens Concert Hall on October 25. The signing of the Memorandum was followed by a discussion about the future of conference tourism and its economic impact featuring two important industry leaders Ray Bloom, Chairman of IMEX Group, and Senthil Gopinath, CEO of ICCA.

On November 18th the GMA was formally presented in Thessaloniki during the Philoxenia Helexpo tourism exhibition. Speakers included President of the Hellenic Association of Professional Conference Organizers & Destination Event Specialists (HAPCO & DES) Sissy Lignou, Athens Development and Destination Management Agency CEO Epameinondas Mousios, and the President of the Board of Directors of the Thessaloniki Convention Bureau, Yiannis Aslanis.

The alliance began taking shape during the pandemic and initially focused on building a portfolio of virtual events while the MICE industry faced an unprecedented crisis. In July 2020, the alliance completed the first survey recording the impact of the pandemic on Greek MICE industry partners. This was followed by two hybrid meetings to present the results of the survey and to discuss the strategy for the future of the meetings industry. The hard work is already showing results. Athens enjoys a stellar reputation as an international destination for meetings and events, ranking 6th in Europe and 8th in the world according to the most recent survey by the International Congress and Convention Association. Additionally, the This is Athens Convention & Visitors Bureau was recognized as Europe’s Leading City Tourist Board at the 2022 World Tourism Awards. Thessaloniki, the second tier city in the north, ranks 35 in Europe and 47 in the world according to the same survey, becoming an emerging destination with excellent facilities and great potential. HAPCO & DES is recognized as a key member in the Global Task Force of PCOs of IAPCO and has increased its extroversion.

In his remarks, Senthil Gopinath noted: “The meetings industry is a catalyst for socio- economic development, and collaborative efforts help create sustainable growth within the industry. The creation of an alliance amongst the meetings industry stakeholders in Greece is on target, timely and focused. On behalf of ICCA, I wish the Greek Meetings Alliance a great success.”

The Mayor of the City of Athens, Kostas Bakoyannis, emphasized the importance of the MICE industry to the city’s strategy for the local economy. “We believe deeply in the power of partnerships to expand the profile of Athens as an international destination for conferences and events,” Bakoyannis said. “This is a strategic priority that is closely linked to urban development. It promotes the upgrade of city infrastructure and should be regarded as a tool that can improve the quality of life of residents.”

Speaking on behalf of the Hellenic Ministry of Tourism, Deputy Minister Sofia Zacharakis said: “We are enthusiastically supporting this exceptional initiative. This new alliance sends a clear message: Greek tourism beat all expectations this year, but we will not rest, we will continue to move forward even more vigorously. The goal is to build high quality and balanced tourism. Conference tourism plays a pivotal role in this development, bringing significant challenges that are also great opportunities. We are determined to utilize them.”

The President of the Hellenic Association of Professional Conference Organizers (HAPCO & DES) Sissy Lignou noted: “The Greek Meetings Alliance sends a resounding message about the power of cooperation and the ability of Greece to become a leading conference destination. Starting from a vision born in the midst of a very difficult situation for the country and for Greek tourism, these three leading organizations began a series of joint actions that today we are formalizing through a memorandum of cooperation. Our association will contribute dynamically and with passion to this common path.”

The President of the Board of Directors of the Thessaloniki Convention Bureau, Yiannis Aslanis said: “This cooperation captures the best characteristics of the meetings industry in Greece: adaptability, professionalism, creativity, cooperation. For MICE professionals, the great value for the national economy is self-evident. We hope that this fact becomes clear in order to earn the support the industry needs at the national level and to compete internationally. Our joint initiative creating an alliance between destinations and professionals representing nearly the entire Greek conference market confirms the importance of planning and actions at the national level.”