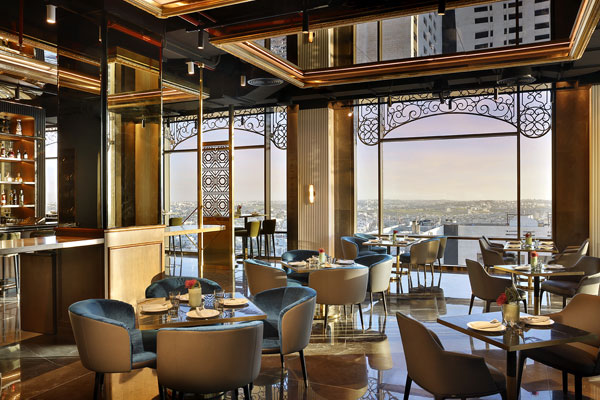 Signature restaurant & lounge takes in a 360-degree view of Amman from the 20th floor.

AMMAN, JORDAN – In an atmosphere of great anticipation, Roberto’s will be opening its doors on the 20th floor of The Ritz-Carlton Hotel, Amman, on May 29, 2022 for what promises to be a uniquely memorable experience.

Roberto’s arrives in Amman with an impressive legacy and stellar reputation, having recently  celebrated its 10-year anniversary in Dubai. An established star of the UAE’s highly competitive culinary scene, Roberto’s is known for its critically acclaimed kitchen, which operates under the overall direction of its Chief Culinary Advisor, three-star Michelin Chef Enrico Bartolini, and Corporate Chef Francesco Guarracino. The restaurant’s kitchen in Amman will be headed by Executive Chef Carmelo Rosselli, who is already intimately familiar with the brand’s concept.

As the signature lifestyle venue of The Ritz-Carlton Hotel, Amman, Roberto’s commands the entirety of the hotel’s top floor from where it enjoys striking views to complement the refined, elevated hospitality experience. Across its expansive space the décor subtly changes from the dramatic urbane bar to the refreshing year-round alfresco terraces and the exclusive ambiance of the music lounge.

Roberto’s stylish bar lounge is certain to become the place to be seen in the Jordanian capital. Guests can retreat with cocktails prepared by skilled mixologists to secluded window seats that have the unrivalled best view in town, enjoy a live DJ set and, as the evening progresses to night, watch the space transform to take on the lively buzz of a cosmopolitan lounge.

In the restaurant diners can relax in a sumptuously designed space, catch wafts of mouthwatering scents from the open kitchen and enjoy an inspiring menu that makes the most out of authentic Italian cuisine, with touches of unique fusion twists, using carefully sourced premium ingredients such as fresh oysters, live lobster, black cod, wild Mediterranean seabass, and Italian truffles.

With a menu that will evolve to reflect the seasons, and those breathtaking ever-changing views, Roberto’s is certain to entice Amman’s residents and visitors alike to return again and again for a new experience, a new view, and a new flavor.