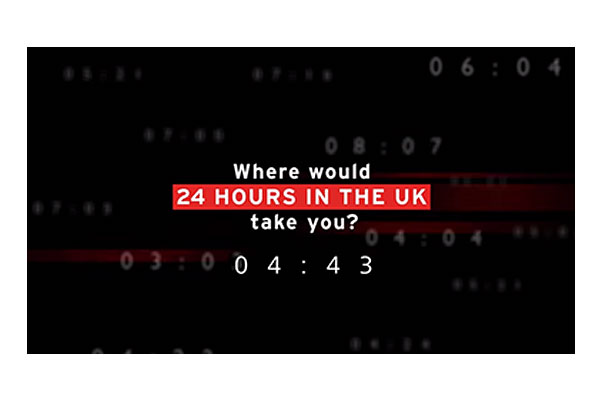 The ‘24 Hours in the UK’ series of films, launched by VisitEngland and the tourism organisations of London, Northern Ireland, Scotland and Wales, showcase activities across the UK throughout a 24-hour period.

VisitEngland has today (‘Blue Monday’ 15 January 2018) launched a digital campaign to promote round-the-clock activities and experiences across the UK, encouraging Brits to beat the January blues by taking a holiday at home.

The ‘24 Hours in the UK’ series of films, launched by VisitEngland and the tourism organisations of London, Northern Ireland, Scotland and Wales, showcase activities across the UK throughout a 24-hour period.

As well as inspiring Britons to take a holiday at home, the campaign is asking people to vote for their favourite moment from the trips with the top five to be announced in the coming weeks.

Part of VisitEngland’s 2018 campaign ‘Join the World – Discover the UK’, the 24 short films by UK and international Instagrammers and bloggers, being released hourly throughout the day.

VisitEngland Director Andrew Stokes said: “From a street art tour in Bristol to early morning surfing at Scarborough in Yorkshire, from a torch-lit tour of the Roman Baths to exploring the wilds of Hampstead Heath in London, this campaign shows that England is bursting with activity not only round-the-clock but year-round, with experiences to suit all interests and ages.

“With many of us looking for travel inspiration to beat the winter blues, these snapshots of destinations across the country will get Brits booking mood-boosting experiences, and exploring more of the country, boosting growth from tourism.”

Latest official statistics show that more people are taking holidays at home and they are spending more too. From January to September 2017 Brits took 47 million domestic holidays in Great Britain, spending £11 billion, an increase of 5% and 6% respectively on the first nine months of the previous year.